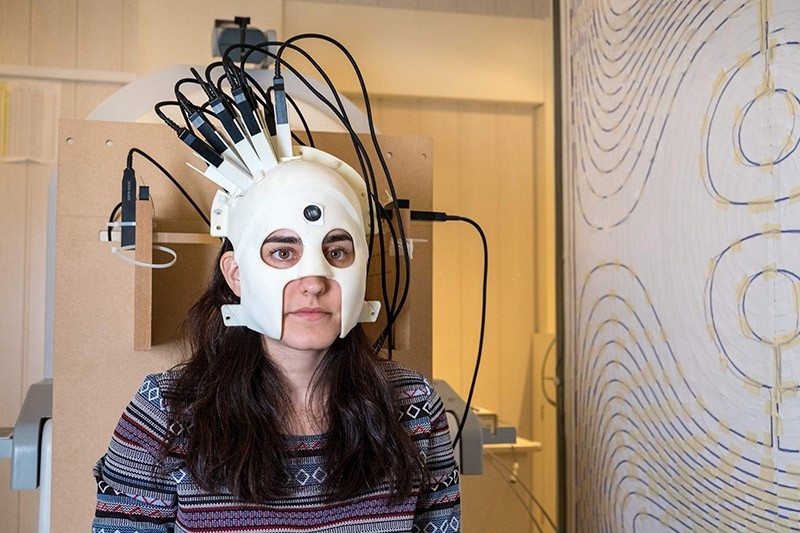 British scientists have developed a lightweight and highly sensitive brain imaging device that can be worn as a helmet, allowing the patient to move about naturally.

Results from tests of the scanner showed that patients were able to stretch, nod and even drink tea or play table tennis while their brain activity was being recorded, millisecond by millisecond, by the magnetoencephalography (MEG) system.

Researchers who developed the device and published their results in the journal Nature said they hoped the new scanner would improve research and treatment for patients who can't use traditional fixed MEG scanners, such as children with epilepsy, babies, or patients with disorders like Parkinson's disease.

"It gives us a new kind of brain scanner that allows us to study things we've never been able to study before and people who have never been able to be scanned in a neuro-imaging environment -- patients from groups like children for example," said Professor Gareth Barnes from University College London, who worked on the project.

"This has the potential to revolutionize the brain imaging field, and transform the scientific and clinical questions that can be addressed with human brain imaging," said Barnes.

Current MEG scanners use sensors to measure the brain's magnetic field that need to be kept extremely cold -- minus 269 Celsius, or close to absolute zero -- requiring bulky cooling technology.

They typically weigh around half a ton (1100 pounds) and patients must remain perfectly still to not disrupt the brain images produced.

This makes it hard to scan patients who are unable to stay immobile for long periods, such as young children or those with movement disorders like Parkinson's disease.

The new scanner, developed by researchers from UCL and the University of Nottingham, does away with the need for cooling by using state-of-the-art "quantum" brain sensors, which represent two giant leaps in scanning technology.

"These can be mounted directly onto the scalp surface so we can bring them into much closer proximity to the brain and that increases the amount of signal that we get," said Matthew Brookes, associate professor at the University of Nottingham.

"This has significant potential for impact on our understanding of not only healthy brain function but also on a range of neurological, neurodegenerative and mental health conditions," Brookes added.

The team are already working on even more customizable, bike-helmet style scanners that they predict could provide brain images four times more accurate than today in adults and 20 times clearer in children.

"This technology has transformative potential across a range of neuroscientific and clinical applications," it said.