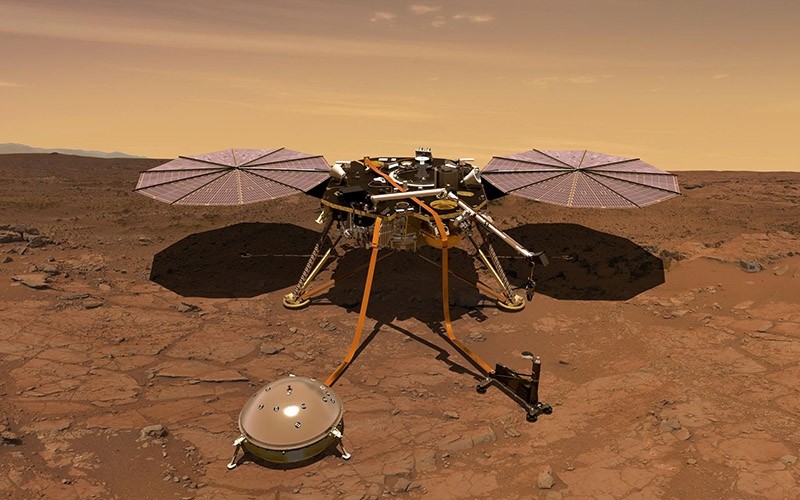 The Mars InSight probe is shown in this artist's rendition operating on the surface of Mars, due to lift off from Vandenberg Air Force Base, California, U.S. on May 5, 2018 in this image obtained on May 3, 2018. (Reuters Photo)
by Compiled from Wire Services May 04, 2018 12:00 am

After decades exploring the surface of Mars, NASA is set for the weekend launch of its first robotic lander dedicated to studying the red planet's deep interior, with instruments to detect planetary seismic rumblings never measured anywhere but Earth.

The Mars InSight probe is due for liftoff on Saturday before dawn from Vandenberg Air Force Base near the central California coast, treating early risers across a wide region to the luminous spectacle of the first interplanetary spacecraft to be launched from the U.S. West Coast.

The lander will be carried aloft for NASA and its Jet Propulsion Laboratory (JPL) atop a powerful, 19-story Atlas 5 rocket from the fleet of United Launch Alliance, a partnership of Lockheed Martin Corp and Boeing Co.

InSight will be released about 90 minutes after launch on a 301 million-mile (548 km) flight to Mars, and is due to reach its destination six months later, landing on a flat, smooth plain close to the planet's equator called the Elysium Planitia.

The 800-pound (360 kg) spacecraft - its name is short for Interior Exploration Using Seismic Investigations, Geodesy and Heat Transport - marks the 21st U.S.-launched Martian exploration, dating back to the Mariner fly-by missions of the 1960s. Nearly two dozen other Mars missions have been launched by other nations.

Once settled, the solar-powered InSight will spend two years - one about one Martian year - plumbing the depths of the planet's interior for clues to how Mars took form and, by extension, the origins of the Earth and other rocky planets.

"The science we want to do with this mission is really the science of understanding the early solar system," JPL's Bruce Banerdt, InSight principal investigator, said during a pre-launch briefing for reporters on Thursday.

InSight aims to rest in an isolated spot and detect "marsquakes," which NASA described as "like a flashbulb that illuminates the structure of the planet's interior."

The lander will gather information using three instruments, including a seismometer, called the Seismic Experiment for Interior Structure, made by the French Space Agency.

Bruce Banerdt, InSight principal investigator at NASA's Jet Propulsion Laboratory in Pasadena, called the seismometer "the heart of the mission."

After landing, the spacecraft's robotic arm will gently pull it out and set it on the ground, according to video images released by NASA.

Scientist expect to pick up as many as 100 quakes during the mission, which should last at least 26 Earth months, or one Martian year.

Most of the quakes are expected to be less than 6.0 on the Richter scale.

Studying how seismic waves pass through the crust, mantle and core of Mars can help scientists learn more about what the layers are made of and how deep they are.

The second key instrument is a first-of-its-kind on Mars self-hammering probe that will monitor the flow of heat in the planet's subsurface.

Called the Heat Flow and Physical Properties Package, it was made by the German Space Agency with the participation of the Polish Space Agency.

The probe should go 15 times deeper than any previous Mars mission, to a depth of 10 to 16 feet (three to five meters), said NASA.

A third instrument will help scientists on Earth keep precise track of the lander's location as Mars rotates.

The U.S. spent $813.8 million on the spacecraft and rocket launch, while investments on the instruments from France and Germany amount to $180 million, according to NASA.

A pair of mini-spacecraft that are also launching on the rocket cost NASA $18.5 million.

Known as Mars Cube One, or MarCO, the briefcase-sized satellites "will fly on their own path to Mars behind InSight," and test tiny new deep space communications equipment, NASA said.

Delay due to glitch

InSight was initially supposed to launch in 2016 but a problem with the seismometer was discovered in late 2015. One component cracked slightly during tests to replicate the large temperature extremes on Mars, which dipped to -120 Celsius (-194 Fahrenheit.)

Engineers decided it could not be patched, and NASA granted more time for them to properly fix the problem by shifting the launch window to 2018.

Launch weather officer Kristina Williams told reporters the weather forecast for Saturday morning is expected to be foggy, but that there were no other constraints to liftoff.

If Saturday's launch is delayed for any reason, another opportunity opens Sunday.

NASA's pair of Viking landers in the late 1970s had seismometers but only one of them worked. It was much less sensitive because it was bolted on top of the spacecraft.

In contrast, InSight's seismometer will be picked up with a robotic arm and placed directly on the ground.

InSight aims to be the first NASA instrument to land on Mars since the Curiosity rover which arrived in 2012 and is still working.