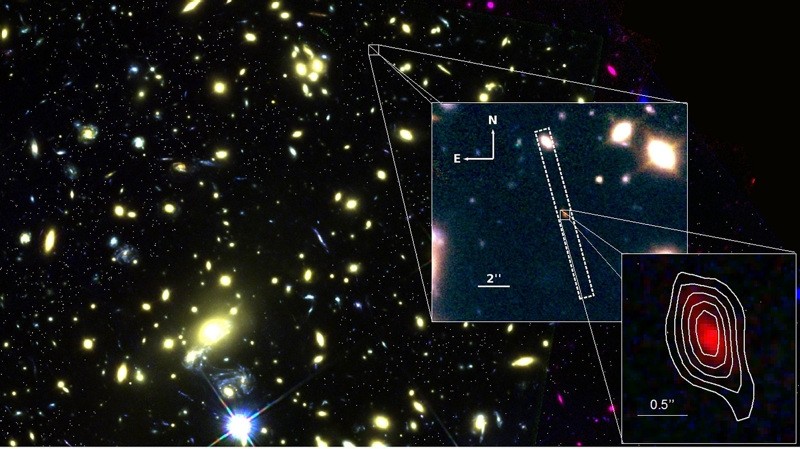 This handout image received via University College London shows Galaxy MACS1149-JD1 located 13.28 billion light-years away imaged as seen with the NASA/ESA Hubble Space Telescope. (AFP Photo)
by May 17, 2018 12:00 am

After detecting a whiff of oxygen, astronomers have determined that stars in a faraway galaxy formed 250 million years after the Big Bang -- a rather short time in cosmic terms -- in a finding that sheds light on conditions in the early universe.

Their research, published on Wednesday, provides insight into star formation in perhaps the most distant galaxy ever observed. The scientists viewed the galaxy, called MACS1149-JD1, as it existed roughly 550 million years after the Big Bang, which gave rise to the universe about 13.8 billion years ago.

Light emitted by MACS1149-JD1 traveled 13.28 billon light years before reaching Earth. Looking across such distances lets scientists peer back in time. A light year is the distance light travels in a year, 5.9 trillion miles (9.5 trillion km).

The detection of oxygen in MACS1149-JD1 was particularly instructive. The universe initially was devoid of elements such as oxygen, carbon and nitrogen, which were first created in the fusion furnaces of the earliest stars and then spewed into interstellar space when these stars reached their explosive deaths.

The presence of oxygen showed that an even earlier generation of stars had formed and died in MACS1149-JD1 and that star formation in that galaxy began about 250 million years after the Big Bang when the universe was only about 2 percent of its current age, the researchers said.

The oxygen in MACS1149-JD1 was the most distant ever detected.

"Prior to our study, there were only theoretical predictions of the earliest star formation. We have for the first time observed the very early stage of star formation in the universe," said astronomer Takuya Hashimoto of Osaka Sangyo University in Japan.

The study marked another step forward as scientists hunt for evidence of the first stars and galaxies that emerged from what had been total darkness in the aftermath of the Big Bang, a time sometimes called "cosmic dawn."

"With these observations, we are pushing back the limit of the observable universe and, therefore, we are coming closer to the cosmic dawn," University College London astronomer Nicolas Laporte said, adding that computer simulations suggest that the first stars appeared around 150 million years after the Big Bang.

The researchers confirmed the distance of the galaxy with observations from ground-based telescopes in Chile and reconstructed the earlier history of MACS1149-JD1 using infrared data from orbiting telescopes.

The research was published in the journal Nature.