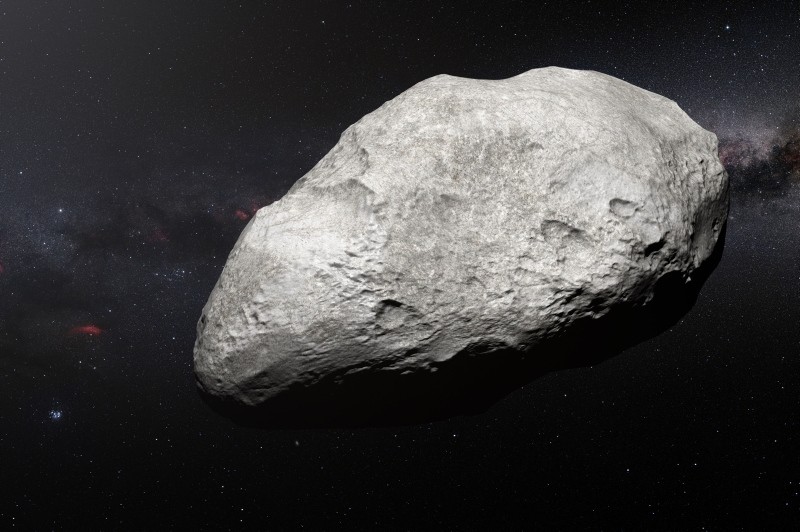 An "alien asteroid" that circles the sun in the giant gas planet Jupiter's orbital path, but hurtling in the opposite direction, is the first-known permanent resident of our solar system that astronomers have concluded originated in another star system.

Researchers said on Monday a close examination of the asteroid's orbit indicated it formed elsewhere and was captured by gravitational forces when our solar system -- the sun, planets and various other objects -- formed from a swirling cloud of gas and dust about 4.5 billion years ago.

"It is a strong candidate for the oldest object in the solar system," said astronomer Fathi Namouni of Observatoire de la Côte d'Azur in France.

The asteroid, called (514107) 2015 BZ509 or "BZ" for short, measures nearly 2 miles (3 km) wide. Its composition is unknown. BZ orbits in the opposite direction of all the planets and nearly everything else in the solar system called a retrograde orbit.

"If the solar system had a consular service and could issue visas to incoming asteroids, then 'Oumuamua had only a short-stay visa whereas BZ was issued a green card," signifying permanent-resident status, Namouni said.

BZ, observed with ground-based telescopes in Hawaii and Arizona, apparently tumbled into interstellar space when the star system where it formed interacted with other systems in a tightly packed star cluster.

"The solar system formed in a star cluster where each star has its own planets and asteroids. The close proximity of the star systems, assisted by their gravitational interactions, helped remove and capture asteroids," Namouni said.

"The motion of the asteroid is synchronized with that of Jupiter. They complete an orbit around the sun in the same amount of time while moving in opposite directions," said astronomer Helena Morais of Universidade Estadual Paulista in Brazil.

BZ may be pertinent in discussions about life's origins on Earth.

"This discovery tells us that the solar system is likely to be home to more extra-solar asteroids and comets captured early in its history. Some of these objects may have collided with the Earth in the past possibly carrying water, biomolecules or even organic material," Morais added.

The researchers said a few dozen other solar system objects with retrograde orbits are being investigated as possible "alien asteroids."

The research was published in the Monthly Notices of the Royal Astronomical Society: Letters.