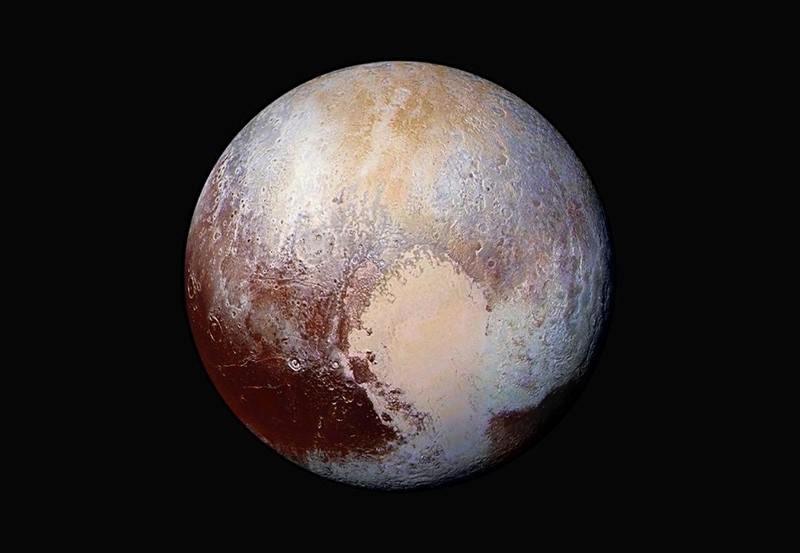 The planet Pluto is pictured in a handout made up of four images from New Horizons' Long Range Reconnaissance Imager (LORRI) taken in July 2015 combined with color data from the Ralph instrument. (Image from NASA via Reuters)
by Compiled from Wire Services Jun 01, 2018 12:00 am

Scientists have detected another exotic feature on one of the solar system's most wondrous worlds, a large field of dunes on the surface of the distant, frigid dwarf planet Pluto apparently composed of wind-swept, sand-sized grains of frozen methane.

The dunes, spotted on images taken by NASA's New Horizons spacecraft during its 2015 flyby, sit at the boundary between a heart-shaped nitrogen glacier about the size of France called Sputnik Planitia and the Al Idrisi Montes mountain range made of frozen water, scientists said Thursday.

"Pluto, even though it's so far away from Earth and so very cold, has a riot of processes we never expected to see. It is far more interesting than any of us dreamed, and tells us that these very distant bodies are well worth visiting," Brigham Young University planetary scientist Jani Radebaugh said.

Scientists were surprised to find dunes given Pluto's thin, weak atmosphere. They suggest nitrogen ice coating the surface of Sputnik Planitia transformed into gas that lifted methane particles into the air. Pluto's gentle winds then carried and deposited the grains.

Dunes already have been found on Mars, Venus, Saturn's moon, Titan, and even a comet. But Pluto's are the only ones known to consist of methane.

"Pretty much nowhere else we know of is cold enough!" the study's lead author, Matt Telfer of Plymouth University in England, said via email Thursday.

He noted there are dunes on the scorching surface of Venus under a dense atmosphere and out in the distant reaches of the solar system at minus 230 degrees Celsius (minus 400 degrees Fahrenheit) under a thin atmosphere.

Pluto, smaller than Earth's moon with a diameter of about 1,400 miles (2,380 km), orbits roughly 3.6 billion miles (5.8 billion km) away from the sun, almost 40 times farther than Earth's orbit, with a surface marked by plains, mountains, craters and valleys.

Researchers liken the dunes to those at White Sands, New Mexico, or California's Death Valley.

"It's a little bit lower density than sand we're used to holding on the Earth," Brigham Young University's Jani Radebaugh, a co-author, explained by phone. "So it would feel lighter in your hand, but it would still be granular and would kind of flow off of your hand, and your feet would kind of crunch them as you're walking along. It would just kind of feel a lot like you're on another sand dune on the Earth."

The team has yet to determine the height of the dunes; Telfer guesses they're at least tens of meters (yards) tall.

"Much work is left to do to understand dunes on Pluto," Cornell University's Alexander Hayes wrote in a companion article. He was not involved in the study. "Most notably, it remains to be shown how high the dunes are, when they are most active, whether they change" and whether particles can be swept into dunes without rising into the air.

Nonetheless, he described the Telfer team's argument for uplifted methane granules as convincing.

The research was published in the journal Science.

Launched in 2006, New Horizons was the first spacecraft ever to visit Pluto, passing within 7,770 miles (12,500 kilometers). The spacecraft is now headed toward an even more distant world in our solar system's so-called Kuiper Belt, or Twilight Zone. It's expected to zip past the Kuiper Belt object nicknamed Ultima Thule — orbiting 1 billion miles (1.6 billion kilometers) beyond Pluto — on Jan. 1.