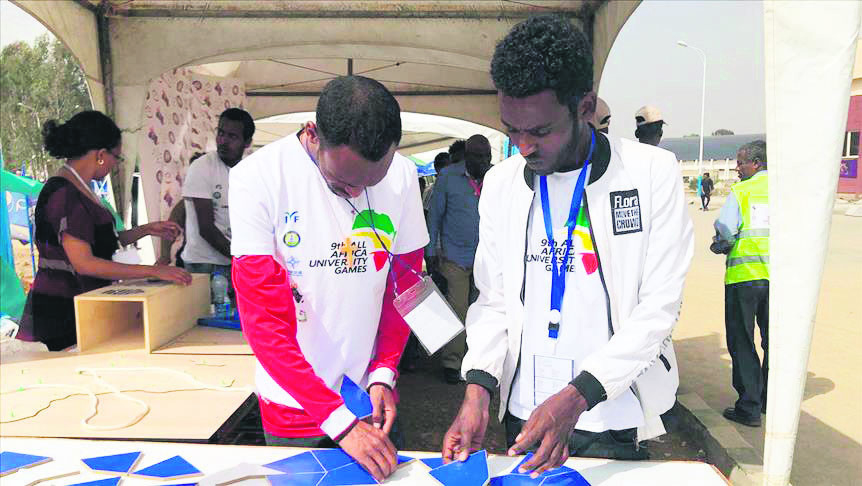 The museum, aimed to increase awareness of mathematics and science, was set up as part of the 9th All Africa University Games 2018, which is underway in Mekelle University.

The five-day games began on July 2 with thousands of university students from 18 African countries participating in various activities, competitions and exhibitions in science, sports and arts.

The museum is part of the Yunus Emre Institute's Turkish Academic and Scientific Cooperation Project (TABIP).

Özgur Can Yıldız, an official at the museum, told Anadolu Agency (AA) that the museum was built yesterday and it has been visited by hundreds of students with great interest.

Prof. Hiwot Kindeya, rector of Mekelle University, visited the museum. "This is definitely the most interesting stand at the event," she noted.

Traveling to other parts of Ethiopia

Dr. Macit Koç, advisor to the rector of Mekelle University and coordinator of the project in Ethiopia, said: "We are very pleased with the response we get. After the African University Games, our museum will travel to different cities in Ethiopia for students from various regions."

Koç said that the museum would be donated to a university in Ethiopia.

TABIP was initiated by the Turkish presidency to enable young people in poor countries to experiment with new ideas and young scientists to connect with each other.

In February and March, some 45,000 Syrian children aged 6-18 years, who are living in temporary shelter and protection centers in Turkey visited the museum.

The museum went to Bosnia and Herzegovina and Hungary after its tour in Turkey.