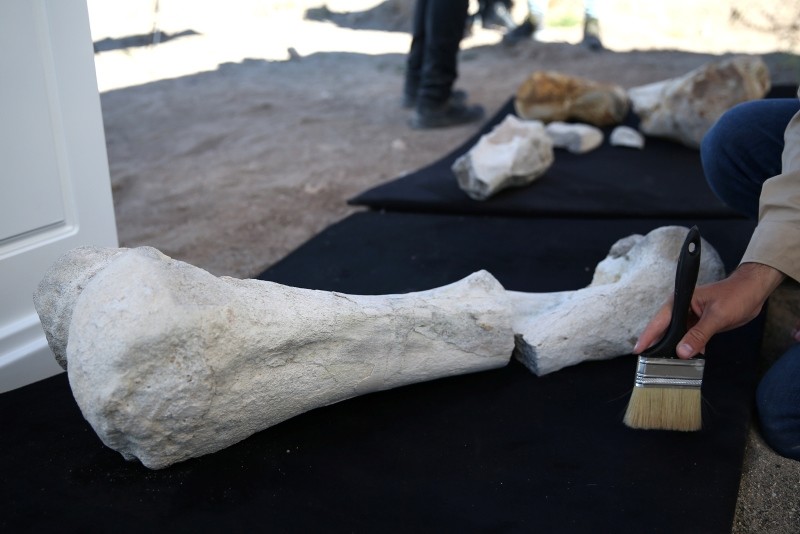 Elephantidae fossils, estimated to be around 7.5 million years old, were discovered in Turkey's central Anatolian province of Kayseri.

Elephantidae are the biological family of animals with trunks and horns such as elephants and extinct mammoths.

The archaeological excavations started near Çevril neighborhood after a shepherd found a fossil.

Kayseri Mayor Mustafa Çelik held a press meeting to announce the new discovery along with Professor Okşan Başoğlu of the archaeology department at Gazi University and Professor Cesur Pehlivan, dean of the fine arts faculty at Hacı Bektaş Veli University.

Çelik said upon the call of the shepherd, the municipality alerted scientists to excavate the area.

"Our scientists said these fossils are one-of-a-kind in Turkey as they are in one piece," said Çelik. "They said that these elephantidae fossils most probably belong to ancient elephants," he said.

Başoğlu said the Anatolia region is full of rich fossil beds because of its geographic location.

"Kayseri can be a hub in this prospect. We have been working in this area since last week and found amazing stuff," the professor said.

Pehlivan said the fossils are estimated to be around 7.5 million years old.

"The researches continue about this matter, we are still at the beginning. I do not think it is right to say which animal exactly," the professor said.

"But we can say about the fossils that they belong to elephants, mammoths that do not exist anymore in today's world."