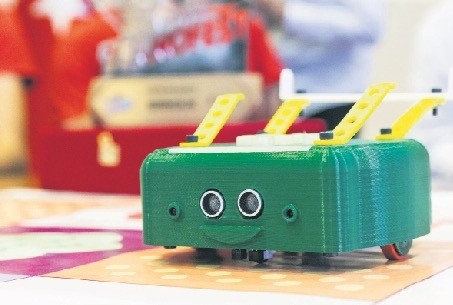 It is important for students to step into the world of algorithms and programming at a very young age, as we are living in the age of technology. Bearing this in mind, the robotics team BigBang - composed of students from Istanbul University - invented a small robot called the "smart beetle" to teach kindergarten and elementary school students the world of algorithms. And the "smart beetle" won the biggest prize at TEKNOFEST, Turkey's first aerospace and technology festival that took place last week in Istanbul.

"Smart beetle" is designed for students between the ages of five and 10 to teach them the basics of robotic programming, algorithms and ways to use computers more efficiently.

The robot features seven buttons on it which are used to operate it. The students are able to move the robot around with the buttons or the program that can be used with Android devices. With the instructions, students try to complete the parkour designed for the smart beetle through which they learn how algorithms in robots work. Through the various simulations that the smart beetle offers, students are able to understand the basic logic behind computer programming.

Speaking on their inventions, Dr. Hüseyin Yıldız, the project adviser for the "smart beetle," said the tiny robot is designed for children as a helper and a friend. He also said the robot works with Arduino Android software and designed with a 3D printer.