Skull-shaped 'Death Comet' to fly past Earth around Halloween

Stargazers with a penchant for the macabre are excited by the return of an asteroid that resembles a skull due to fly by the Earth around Halloween.

"It has two depressions that you could interpret as eyes," Ruediger Jehn of the European Space Operations Centre (ESOC) in the German city of Darmstadt said on Tuesday. "But there is a lot of imagination involved."

The U.S. space agency NASA was more upbeat when it first detected the asteroid in 2015 as it flew much closer to the Earth at just under 500,000 kilometers, nicknaming it "The Great Pumpkin."

"The large space rock that will zip past Earth this Halloween [in 2015] is most likely a dead comet that, fittingly, bears an eerie resemblance to a skull," it said. 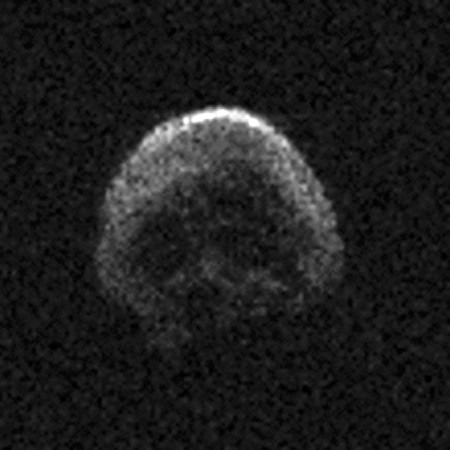 The asteroid, dubbed 2015 TB145 and called 'Death Comet' by social media users, measures 600 meters in diameter, with two craters each 100 meters across. It is not a threat to the Earth.

It is due to fly past the Earth this time at a distance of 40 million kilometers, and will only be seen as a point of light even with a powerful telescope. "But it can still serve as the basis for science fiction fans to have fun," Jehn, an expert for the European Space Agency (ESA), conceded.

The skull asteroid, which has a solar orbit lasting just over three years, will be closest to the Earth on November 7 this year, Sven Melchert, the head of the German amateur astronomers' organization, said.