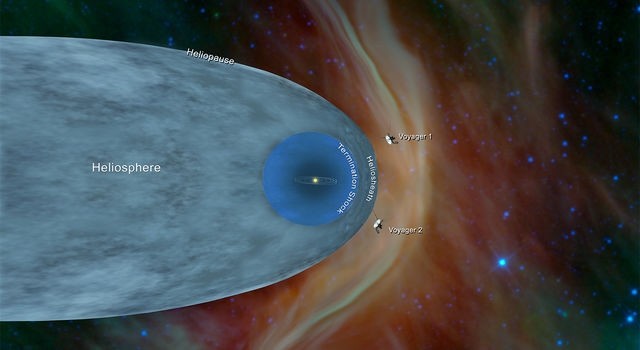 Illustration shows the position of Voyager 1 and 2 probes, outside of the heliosphere, a protective bubble created by the Sun that extends well past the orbit of Pluto. (Photo courtesy of NASA/JPL-Caltech)
by Dec 10, 2018 12:00 am

NASA's Voyager 2 probe has left the protective bubble around the Sun and is flying through interstellar space, becoming the second human-made object to travel so far, the U.S. space agency said Monday.

The announcement came six years after its twin spacecraft, Voyager 1, broke the outer boundary of the heliopause, where the hot solar wind meets the cold, dense space between stars, known as the interstellar medium.

Voyager 2 is now more than 11 billion miles (18 billion kilometers) from Earth, having passed the boundary on Nov. 5.

"This time is even better for us," said Nicky Fox, director of the heliophysics division at NASA, noting that one instrument, called the Plasma Science Experiment (PLS), is still functioning on Voyager 2.

"To have the Voyagers sending back information about the edge of the Sun's influence gives us an unprecedented glimpse of truly uncharted territory."

The same instrument on Voyager 1 stopped working in 1980.

The two spacecraft, which look like a combination of a satellite dish and an old television set with rabbit ear antennas, were launched in 1977 on a mission to explore planets in our solar system.

The twin probes have left the heliosphere, but have not yet left the solar system, "and won't be leaving anytime soon," NASA said in a statement.

"The boundary of the solar system is considered to be beyond the outer edge of the Oort Cloud, a collection of small objects that are still under the influence of the Sun's gravity."

NASA says it will take about 300 years for Voyager 2 to reach the inner edge of the Oort Cloud, and possibly 30,000 years to fly beyond it.

"We're looking forward to what we'll be able to learn from having both probes outside the heliopause," said Suzanne Dodd, Voyager project manager at NASA's Jet Propulsion Laboratory in Pasadena, California.

The two spacecraft were designed to last five years and study Jupiter and Saturn.

"Both spacecraft are very healthy, if you consider them senior citizens," said Suzanne Dodd, Director for the Interplanetary Network Directorate, as the science results were unveiled at the American Geophysical Union annual meeting in the U.S. capital.

A key concern is power, and NASA has to keep shutting down instruments to reserve power. But they may have five to 10 years left of life, she said.

Each spacecraft carries a Golden Record of Earth sounds, pictures and messages, which aims to serve as evidence of Earth's civilization.