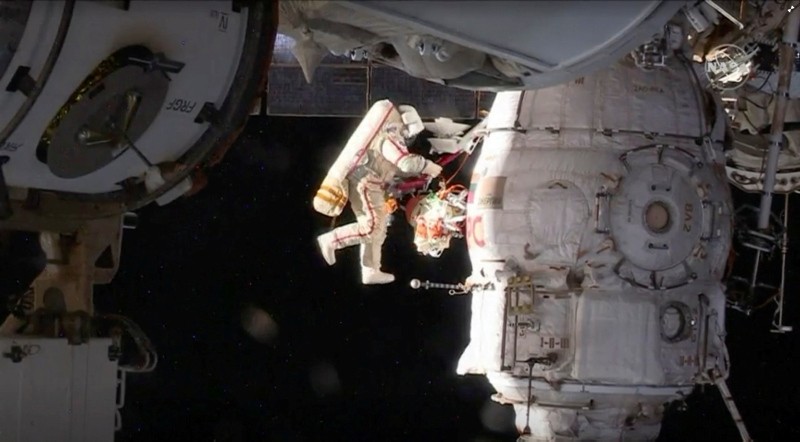 Russian cosmonaut Oleg Kononenko conducts a spacewalk outside the International Space Station Space (ISS) in this still image captured from NASA video in space, Dec. 11, 2018. (NASA via Reuters)
by Associated Press
Dec 12, 2018 12:00 am

Spacewalking astronauts ripped through thick insulation on a capsule docked to the International Space Station on Tuesday, looking for clues to a mysterious drilled hole that leaked precious cabin air four months ago.

Russians Sergei Prokopyev and Oleg Kononenko spotted the tiny hole in the external hull of the Soyuz capsule, more than five hours into their grueling spacewalk.

"That is exactly the hole we've been looking for, guys," radioed Russian Mission Control outside Moscow.

The spacewalkers reported seeing no drill marks around the black dot, like on the inside.

Back in August, the station crew patched the hole in the Soyuz capsule, plugging it with epoxy and gauze. Russian space officials wanted the site surveyed from the outside, before the capsule's return to Earth next week with Prokopyev and two others. This part of the capsule will be jettisoned as usual before atmospheric re-entry, and so poses no risk for descent.

Prokopyev and Kononenko had to use a pair of telescoping booms to reach the Soyuz. It took nearly four hours for them to cross the approximately 100 feet (30 meters) to get there. Then the insulation proved harder to remove than expected, taking another one to two hours of effort.

To expose the external hull, they cut away a 10-inch (25-centimeter) swatch of thermal insulation and debris shield. Bits of shredded silver insulation floated away like confetti, as the two slashed at it with a knife and long cutters. The astronauts collected samples of the black epoxy sealant protruding from the hole, just one-tenth of an inch (2 millimeters) across.

"It was very difficult ... but we were able to get it done," one of the spacewalkers said.

NASA said the pieces of freed insulation posed no threat to the space station and would likely burn up in the atmosphere in a day or so.

The capsule leak caused a flap between the U.S. and Russian space agencies, following its discovery at the end of August. Russian space chief Dmitry Rogozin observed that the hole could have been drilled during manufacturing — or in orbit. The space station's commander at the time flatly denied any wrongdoing by himself or his crew.

Rogozin has since backpedaled his statement, blaming the news media for twisting his words.

A Russian investigation is ongoing, according to Rogozin, and samples collected during the spacewalk will be returned to Earth on the Soyuz. The spacewalk findings could lead to better repair techniques in the future, officials said.

The Soyuz is scheduled to depart the orbiting lab on Dec. 19, U.S. time, with Prokopyev, American Serena Aunon-Chancellor and German Alexander Gerst, the station's current skipper. It ferried them up in June.

Remaining aboard the 250-mile-high (400-kilometer-high) outpost for the next six months will be an American, Russian and Canadian who arrived last week.

This was the 213th spacewalk in 20 years at the space station.