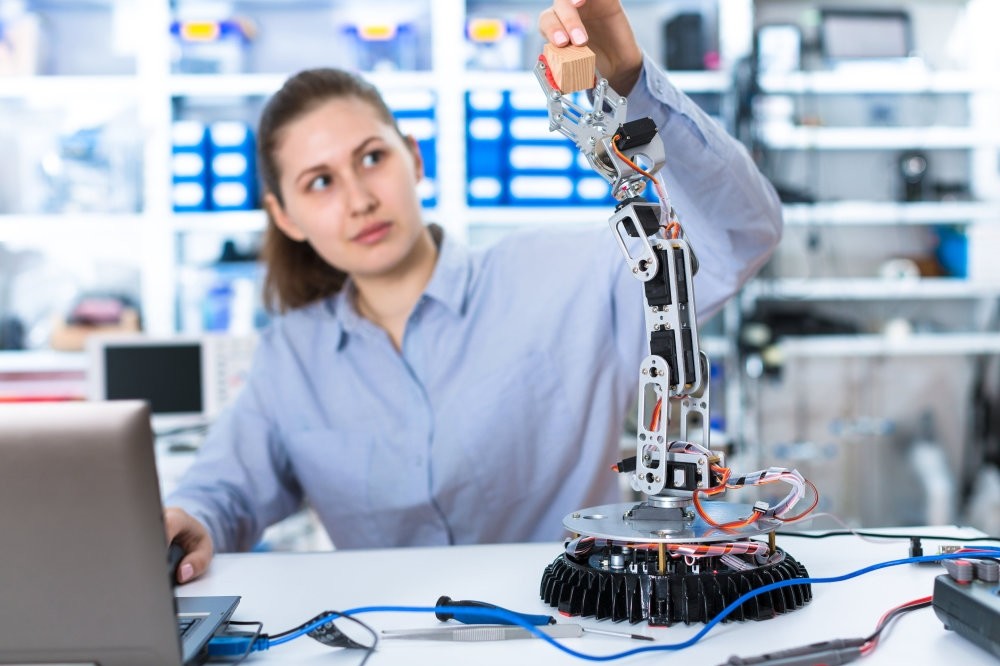 The number of female AI experts is on the rise around the world but with the machines taking over mankind's place at the workplace, many women face the danger of loosing their jobs.
by Şule Güner Jan 03, 2019 12:00 am

The number of women working in the tech industries, especially areas related to artificial intelligence (AI), is getting higher and higher. The male domination in AI industry is also coming to an end, with 24 percent of AI experts in Turkey being women

The World Economic Forum (WEF) publishes its report entitled, "Business Life and Gender Differences," every year. The report got a new name for the first time this year; as you can imagine, this title relates to artificial intelligence (AI). The WEF researched the rates of female AI experts in the workforce in 146 countries.

Some important points in the report include caring for children at home, robots taking the place of workers at factories and offices being the most significant factors in women losing their jobs. The WEF Center for the New Economy and Society President Saadia Zahidi says that robotic and artificial intelligence technologies take place in fields where women traditionally work, such as management, customer relations and telemarketing.

According to a 2017 study by Brookings Institution, a U.S.-based think tank, digital tools have been included in 517 out of 545 jobs in the U.S. since 2002. The organization says that low-profile jobs have taken the highest share from digitalization. Technology experts, therefore, comment that women workers with less digital skills will have the greatest share from this digital hit and so they will have difficulty finding jobs.

After sharing all this information, we need to mention the striking numbers about artificial intelligence that the WEF announced. Only 22 percent of those who work in AI fields across the world are women. According to this report, the countries where artificial intelligence skills are highest regardless of sex are the U.S., India and Germany. However, we should state that the difference between the two sexes is huge.

For example, while 77 percent of AI experts are men and 23 percent are women in the U.S., this rate is 78-22 percent in India and 84-16 percent in Germany. In the list which the WEF prepared according to the data of Linkedln, the social media platform preferred by professionals and where 20 countries from North America, Asia, Europe and South America take place, Turkey is 16th. While 76 percent of artificial intelligence experts are men in Turkey, the remaining 24 percent are women. On the other hand, it is pleasing that the rate of gender difference in Turkish artificial intelligence experts is lower than it is in many developed countries. The biggest difference between the two sexes reveals itself most in Brazil, Germany, Mexico, Poland and Argentina.One important point highlighted in the report is that a better performance in decreasing this gap between the sexes was shown in 2018 when compared to 2017. However, we will still need 108 more years to equalize women and men in business life at this rate.

Most women in software and informatics

In its annual report, the WEF, collaborating with Linkedln, shared the distribution of female AI experts in different industries.

According to this, women's share in software and informatics sectors, where 39.2 percent of artificial intelligence workers work, is 7.4 percent. Woman artificial intelligence experts respectively serve in education with a 4.6 percent rate, in finance with 1.4 percent, in production with a ratio of 1 percent, and in the corporate services sectors again with a ratio of 1 percent. Health, hardware-networking, nonprofit organizations, media and communications, entertainment, energy-mining follow these sectors.

If we look at the distribution of in what technological areas woman artificial intelligence experts work, machine learning comes first.

Offering information on female employment in Turkey, Aylin Satun Olsun, president of the Professional Women's Network (PWN) Istanbul, said, "In Turkey, 30 million of the population of 60 million which is over the age of 50 and can be employed is women. However, 20 million of 30 million women cannot participate in the workforce due to reasons such as housework, retirement, disability and not seeking a job. If we consider that only 8.9 million women work in our country, we can see that we cannot use such an important resource to compete at the level of developed countries."

According to Olsun, the occupations that will disappear with digitalization and the interdependence of objects with the internet affect especially the sectors and business areas where women work mostly.

"In the fields of banking, retail, operations, many women who work as supporter members or even experts will lose their jobs," she added. "Educating and raising awareness of women employees in the business area and new technologies is an issue that should be on the agenda and it is all of responsibility in the short and medium term. We need to work together with state authorities, nongovernmental organizations and the private sector."

In a study by Pew, one of the world's leading research companies, conducted in the summer of 2018 among 979 technology pioneers, innovators, developers, business and political leaders, researchers and activists, it was revealed that 63 percent of the participants think that artificial intelligence will have positive effects on humanity in the next decade.

In the light of the data collected by Pew, the opinions of the participants of the survey can be briefly summarized: Computers will catch up and even surpass human intelligence.

As the intelligent systems that come with digitalization take place in public space, vehicles, buildings and facilities, farms and business processes, time and cost will be saved. This will give people a more personalized and comfortable life.

Some points that participants of the survey are worried about:

With increasing digitalization, people use digital tools - the content of which they do not know - at the cost of losing their independence

Cognitive, social and vital skill losses in people caused by their trust in AI systems

Information flow can be transformed into autonomous weapons, cybercrime and other weapons

These people, who worry about artificial intelligence's affects on human life, call for the development of artificial intelligence policies according to the needs and the benefit of people including economically. They want political systems to increase the human capacity in the human-AI collaboration and think people should unite, in the global sense, to struggle against the problems caused by digitalization.