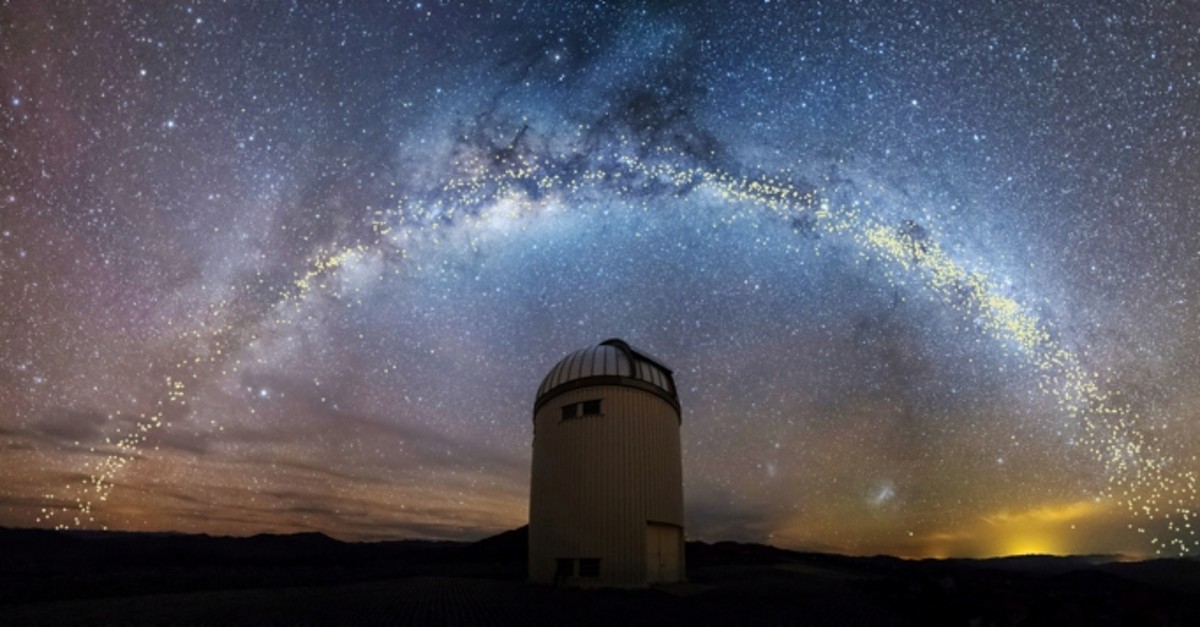 The warped shape of the stellar disk of the Milky Way galaxy, determined by mapping the distribution of young stars called Cepheids with distances set out in light years, is seen over the Warsaw University Telescope (Reuters Photo)
by Aug 01, 2019 11:08 pm

Astronomers have created the most precise map to date of the Milky Way by tracking thousands of big pulsating stars spread throughout the galaxy, demonstrating that its disk of myriad stars is not flat but dramatically warped and twisted in shape.

The researchers on Thursday unveiled a three-dimensional map of the Milky Way - home to more than 100 billion stars including our sun - providing a comprehensive chart of its structure: a stellar disk comprised of four major spiral arms and a bar-shaped core region.

"For the first time, our whole galaxy - from edge to edge of the disk - was mapped using real, precise distances," said University of Warsaw astronomer Andrzej Udalski, co-author of the study published in the journal Science.

Until now, the understanding of the galaxy's shape had been based upon indirect measurements of celestial landmarks within the Milky Way and inferences from structures observed in other galaxies populating the universe. The new map was formulated using precise measurements of the distance from the sun to 2,400 stars called "Cepheid variables" scattered throughout the galaxy.

"Cepheids are ideal to study the Milky Way for several reasons," added University of Warsaw astronomer and study co-author Dorota Skowron. "Cepheid variables are bright supergiant stars and they are 100 to 10,000 times more luminous than the sun, so we can detect them on the outskirts of our galaxy. They are relatively young - younger than 400 million years - so we can find them near their birthplaces."

The astronomers tracked the Cepheids using the Warsaw Telescope located in the Chilean Andes. These stars pulsate at regular intervals and can be seen through the galaxy's immense clouds of interstellar dust that can make dimmer stellar bodies hard to spot.

The map showed that the galaxy's disk, far from flat, is significantly warped and varies in thickness from place to place, with an increasing thickness measured further from the galactic center. The disk boasts a diameter of about 140,00 light-years. Each light-year is about 6 trillion miles (9 trillion km).

The Milky Way began to form relatively soon after the Big Bang explosion that marked the beginning of the universe some 13.8 billion years ago. The sun, located roughly 26,000 light-years from the supermassive black hole residing at the center of the galaxy, formed about 4.5 billion years ago.