US, British scientists win Nobel Medicine Prize for work on cells and oxygen 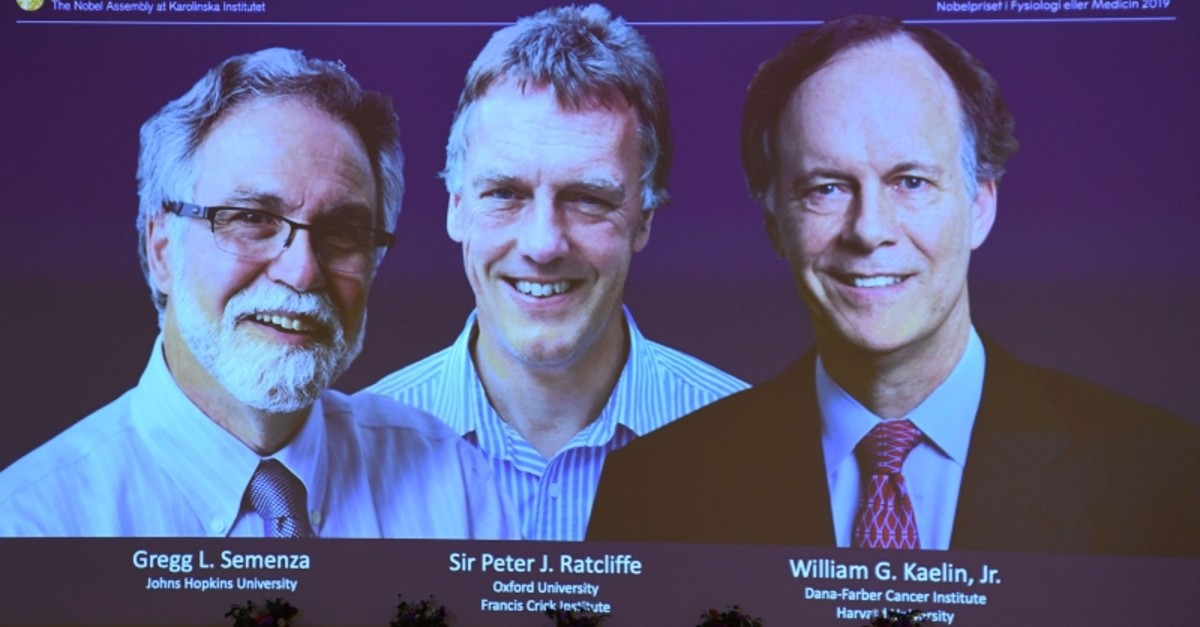 The winners of the 2019 Nobel Prize in Physiology or Medicine (L-R) Gregg Semenza, Peter Ratcliffe and William Kaelin appear on a screen during a press conference at the Karolinska Institute in Stockholm, Sweden, on Oct. 7, 2019. (AFP)
by Compiled from Wire Services Oct 07, 2019 12:43 pm

Scientists William Kaelin, Peter Ratcliffe and Gregg Semenza won the 2019 Nobel Prize for Physiology or Medicine for discoveries of how cells sense and adapt to the availability of oxygen, the award-giving body said on Monday.

"The seminal discoveries by this year's Nobel laureates revealed the mechanism for one of life's most essential adaptive processes," the Nobel Assembly at Sweden's Karolinska Institute said in a statement on awarding the prize of 9 million Swedish crowns ($913,000).

The discoveries made by the three men "have fundamental importance for physiology and have paved the way for promising new strategies to fight anemia, cancer and many other diseases."

The jury said the trio had identified molecular machinery that regulates the activity of genes in response to varying levels of oxygen, which is central to a large number of diseases.

"Intense ongoing efforts in academic laboratories and pharmaceutical companies are now focused on developing drugs that can interfere with different disease states by either activating, or blocking, the oxygen-sensing machinery," the jury said.

BREAKING NEWS:
The 2019 #NobelPrize in Physiology or Medicine has been awarded jointly to William G. Kaelin Jr, Sir Peter J. Ratcliffe and Gregg L. Semenza "for their discoveries of how cells sense and adapt to oxygen availability." pic.twitter.com/6m2LJclOoL

Kaelin works at the Howard Hughes Medical Institute in the U.S., while Semenza is director of the Vascular Research Program at the John Hopkins Institute for Cell Engineering.

The three will receive their prize from King Carl XVI Gustaf at a formal ceremony in Stockholm on Dec. 10, the anniversary of the 1896 death of scientist Alfred Nobel who created the prizes in his last will and testament.

Last year, the honor went to immunologists James Allison of the U.S. and Tasuku Honjo of Japan, for figuring out how to release the immune system's brakes to allow it to attack cancer cells more efficiently.

The winners of this year's Physics Prize will be revealed on Tuesday, followed by the Chemistry Prize on Wednesday.

The Literature Prize will be announced on Thursday, with two laureates to be crowned after a sexual harassment scandal forced the Swedish Academy to postpone the 2018 award, for the first time in 70 years.

The Peace Prize will follow on Friday, with bookies predicting a win for Swedish teen climate activist Greta Thunberg on betting sites such as Ladbrokes.

The Economics Prize will wrap up the Nobel prize season on Monday, Oct. 14.

Medicine is the first of the Nobel Prizes awarded each year. The prizes for achievements in science, peace and literature have been awarded since 1901 and were created in the will of dynamite inventor and businessman Alfred Nobel.