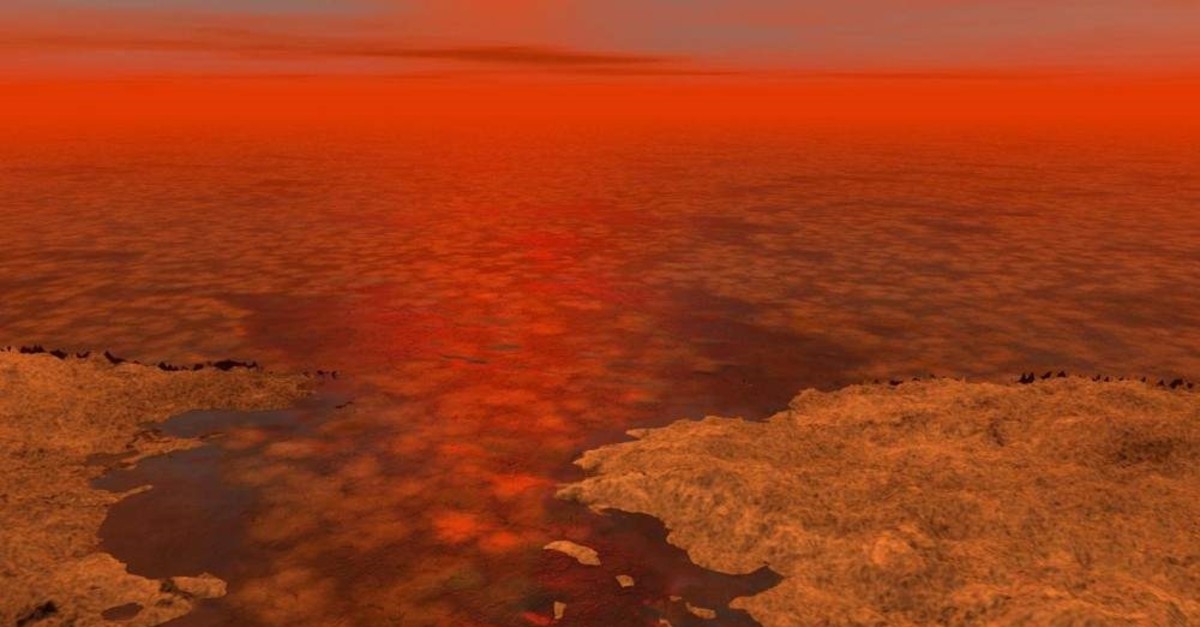 An artist's concept envisions what hydrocarbon ice forming on a liquid hydrocarbon sea on Saturn's moon Titan might look like. (REUTERS Photo)
by Nov 19, 2019 12:59 pm
Scientists on Monday unveiled the first global geological map of Saturn's moon Titan, including vast plains, dunes of frozen organic material and lakes of liquid methane, illuminating an exotic world considered a strong candidate in the search for life beyond Earth.
The map was based on radar, infrared and other data collected by NASA's Cassini spacecraft, which studied Saturn and its moons between 2004 and 2017. Titan, with a diameter of 5,150 kilometers, is the solar system's second-largest moon behind Jupiter's Ganymede. It is larger than the planet Mercury.
Organic material – carbon-based compounds critical for fostering living organisms – play a leading role on Titan.
"Organics are very important for the possibility of life on Titan, which many of us think likely would have evolved in the liquid water ocean under Titan's icy crust," said planetary geologist Rosaly Lopes of NASA's Jet Propulsion Laboratory in California. "Organic materials can, we think, penetrate down to the liquid water ocean, and this can provide nutrients necessary for life if it evolved there," added Lopes, who led the research published in the journal Nature Astronomy.
On Earth, water rains down from clouds and fills rivers, lakes and oceans. On Titan, clouds spew hydrocarbons like methane and ethane – gases also found on Earth – in liquid form due to the moon's frigid climate. Rainfall occurs everywhere on Titan, but the equatorial regions are drier than the poles, said study co-author Anezina Solomonidou, a European Space Agency research fellow. Plains covering 65% of the surface and dunes covering 17% of the surface made up of frozen bits of methane and other hydrocarbons dominate Titan's midlatitudes and equatorial regions, respectively.
Titan is the only other place in the solar system other than Earth boasting stable liquids on its surface, with lakes and seas full of methane major features in its polar regions. Hilly and mountainous areas, thought to represent exposed portions of Titan's crust of water ice, make up 14% of the surface.