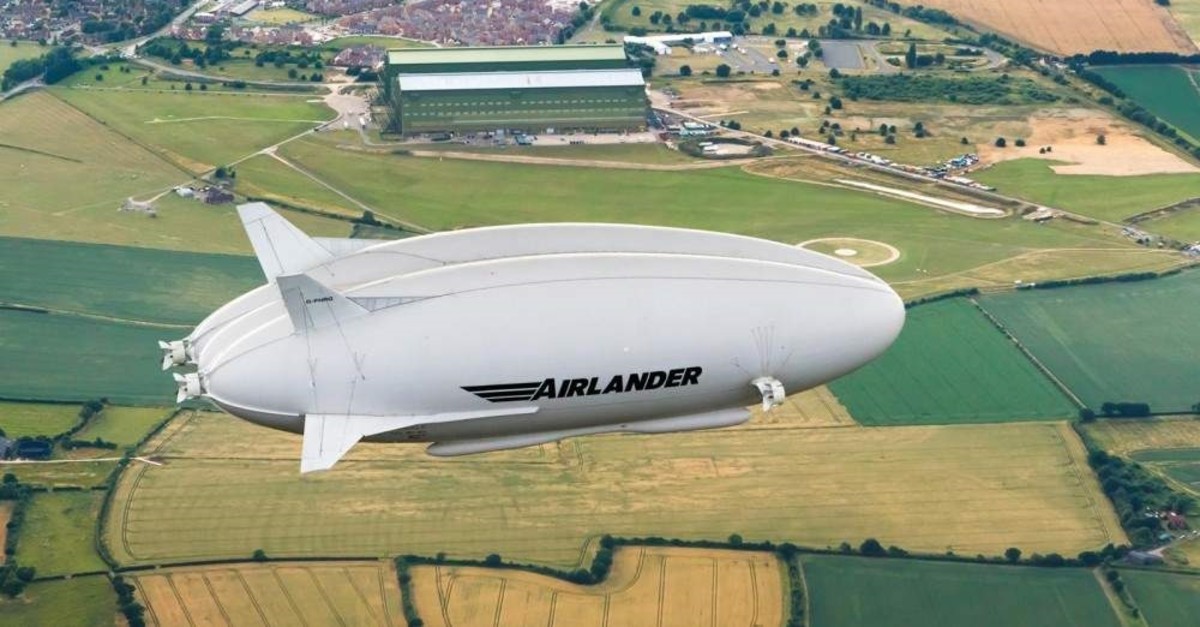 The Airlander, a new hi-tech aircraft developed by a U.K.-based company, will take tourists to the North Pole.
by Şule Güner Nov 27, 2019 2:23 pm

Early examples of sci-fi depicted the 21th century as a place full of tall buildings, flying cars and skies filled with zeppelins. Although the zeppelin was subsequently abandoned over safety fears, we may soon see its revival thanks to new technological advances

The zeppelin was considered an exciting development in the 1920s, bringing hopes of mass, international transit and heavy freight transport covering large distances. However, things did not go according to plan. Following the Hindenburg disaster in 1937, in which a zeppelin exploded into flames upon landing, all hopes for a revolutionary flight age were suddenly turned to ashes. In the 1940s, American. and European governments shelved the method en masse, leaving only a vague recollection of what the technology once symbolized in old fiction and fantasy books. However, thanks to recent technological developments, the airship is looking to make a comeback.
The BBC have announced that the Airlander, a new high-technology aircraft developed by the U.K.-based Hybrid Air Vehicles (HAV), is setting off for the North Pole. The Airlander will cart a group of tourists, each willing to pay $80,000 for the exciting experience.
The BBC reported that the Airlander is designed to carry more cargo and go faster than its competitors. It is of a different design to other commercial aircraft of the same type, with a glass floor in the middle. As seen in early James Bond movies, the blimp has a café-bar to serve its wealthy customers.
Some of the advantages that airship flight affords include the lack of need for such extensive cabin crews or hangars as airplanes. Plus, to prevent gas emissions from hybrid devices such as the Airlander, the British government is reported to have given HAV 1 million pounds ($1.29 million) to provide the craft with an electric rocket system.
HAV has designed two small and one large aircraft models. Airlander 10 is a smaller, passenger-carrying craft. The Airlander 50, on the other hand, is designed to carry heavy loads.
China wants to lead
The Airlander may have launched the Arctic expeditions, but is not alone in the next generation of zeppelin transport, which seems to have revived once again. The production of a zeppelin developed by France-based company Flying Whales is expected to start in 2022, taking off on its maiden voyage from Jingmen, an industrial city in central China. These airships, which are expected to be around 150 worldwide in ten years, will be built in collaboration with Flying Whales and China Aviation Industry General Aircraft (CAIGA). The public transporter, which will be up to 150 meters in length just like an A380 or Boeing 737, is planned to be 12 stories high.
The main use of these airships, however, is expected to be the transport of cargo. Together with the developing technology, these airships, which will be operated using hybrid-electricity with much lower carbon-emission rates than its earlier examples, will be used to travel to places with insufficient infrastructure, as well as challenging, expensive and risky circumstances for commercial aircraft to land.
The relationship between Flying Whales and CAIGA dates back to 2012, when France was looking for ways to transport timber abroad. Since it was too expensive to build highways and runways, they decided that the airship was the right choice. Flying Whales, which designed a helium gas-inflated LCA60T airship that can carry a full 60-ton cargo, has since become a company worth $250 million, about a quarter of which is CAIGA's share.
As in many other sectors, China is expected to lead in the purchase and production of this vehicle. Highly suited to transporting cargo to various regions with poor air and road travel infrastructure across Asia, the airships are hoped to facilitate the transit of vital technologies to these regions, such as generators, batteries, solar panels, and prefabricated building materials to these continents.
U.S.-based company Lockheed Martin is also planning to get involved in this re-emergent tech, having announced their LMH-1 concept, similar to the Airlander 10 at the Paris Air Show four years ago, Lockheed Martin is known to be busy developing a prototype at its California plant.
BOX
Helium, not hydrogen
How can airships change the way we think about safe travel that contributes to national economies and the environment? Firstly, unlike the Zeppelin LZ 129 Hindenburg, which crashed in 1937, the new airships use helium, a much safer gas than hydrogen. However, the gas is expensive. Plus, airships fly at a much slower rate and at a lower altitude compared to other aircraft. This vehicle is more affected by weather conditions than commercial aircraft. Furthermore, it's not possible to receive dozens of orders for these vehicles, unlike commercial aircraft, which may suggest that production technology will remain limited and develop little.
Last Update: Dec 20, 2019 1:57 am
RELATED TOPICS