Crocs have backs against wall after third CL defeat 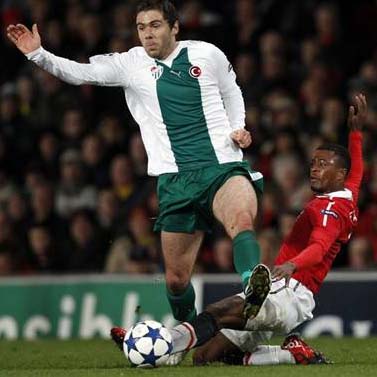 Played three, lost three, no goals for and six against. That is Bursaspor's report card after the Green Crocs were beaten 1-0 by Manchester United in their UEFA Champions League Group C Matchday 3 encounter at Old Trafford on Wednesday night.

United leads the group with seven points. Glasgow Rangers, which held Valencia to a 1-1 draw at Ibrox in the other group match, has five and Valencia four. The Bursa Crocs, the weakest team in the group, now have their backs against the wall.

There are still three matches to go -- meaning nine precious points at stake. The Crocs therefore do not have the luxury of dropping points anymore; they must win against Manchester United at home on Nov. 2, Valencia away on Nov. 24 and the Rangers at home on Dec. 7.

This way the Crocs could continue their European campaign in the less prestigious UEFA Europa League, even if they fail to make the next round of the Champions League. Maybe the Crocs can beat the Rangers in Bursa; but it is a tall order indeed for them to beat United at home and Valencia away to keep their heads above water.

Since no football match is won or lost until it is played, we can continue to hope that the Crocs turn their disadvantage into an advantage. After all "there's no harm in hoping for the best as long as you're prepared for the worst," according to American author Stephen King.
CIHAN
Last Update: Oct 22, 2010 2:00 pm
RELATED TOPICS