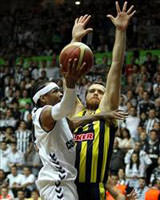 ANKARA, Turkey (AP) - Iverson missed three shots in the first quarter and was taken off with less than a minute left. He returned at the beginning of the second half but did not score until he sank a basket late in the third. He then returned to the bench for the rest of the game.

The win maintained Fenerbahce's perfect league record. It held a 40-35 half time lead and while Besiktas closed the deficit and started the final quarter tied 53-53, it could not continue the comeback.

It was Besiktas' second loss in a week after a 94-91 defeat to Hemofarm Stada in the European Cup Tuesday, when Iverson scored 15 points on his debut. Besiktas handed out paper masks with a picture of Iverson to the fans before the game but their enthusiasm for the team's new signing faded during the match.

Iverson, a former NBA MVP, spent 14 years in the league but was not offered a contract this season. The 11-time NBA All-Star then agreed to a $4 million, two-year contract with Besiktas.

Iverson is 17th on the NBA's career scoring list with 24,368 points with Philadelphia, Denver, Detroit and Memphis. He won the league's Most Valuable Player award in 2001.
---