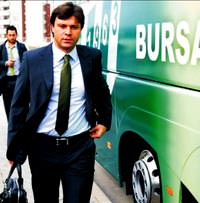 Valencia coach Unai Emery believes his side are capable of overhauling Manchester United at the top of Champions League group C if they can beat bottom side Bursaspor at the Mestalla Stadium on Wednesday.

MADRID — Valencia lie second in the group and victory over the Turks would see them qualify for the knockout phase for the first time since the 2006/07 season if Rangers fail to beat Manchester United at Ibrox in the other group game.

"What we are aiming for now is to win the two remaining group games," said Emery. "If we manage to do that we'll go through as group winners and that has to be our mentality."
Manchester United are currently three points ahead of Valencia and the Spaniards travel to Old Trafford to face Sir Alex Ferguson's side in the final group match on December 7.

For now, the priority is taking the three points against Champions League debutants Bursaspor who have lost all four group games without scoring a goal and were routed 4-0 by Valencia on their own patch in the first encounter between the two sides.

"I am much more positive about things than before," said Bursaspor coach Ertugrul Saglam. "We are getting better and gathering more experience by playing these world class opponents."
Bursaspor are already out of contention and third place is the best the Turkish champions can hope for while Valencia know they can't slip up with Rangers just two points behind.

Valencia have fallen to fifth in the Spanish first division, 11 points behind league leaders Real Madrid, after winning just one of their last six league matches, however, Emery was happy with Saturday's 1-1 draw against Villarreal as they became the first side to pick up a point at El Madrigal this season.

Emery started with a 4-5-1 against Villarreal with Spanish international striker Roberto Soldado on the substitutes bench and the former Real Madrid striker will hope to be back for the Bursaspor game having scored twice in the 3-0 home win over Rangers in the last group match at the Mestalla.

"Hopefully I'll go on a scoring run because I was doing everything except finishing before," said Soldado. "We are delighted that qualification is in our hands and we have to try and win the remaining two games."

Valencia have some injury worries particularly in defence with French defender Jeremy Mathieu definitely out while doubts surround David Navarro and Portuguese full back Miguel who sustained injuries in the Villarreal draw.

The versatile 21-year-old Jordi Alba, who can play at left back or left midfield, hopes injuries give him a chance to sample the European atmosphere at the Mestalla having missed out on the two home games against Rangers and Manchester United.

"I haven't experienced the great European nights at the Mestalla and I would like to do so," said Alba. "The team have done well in this competition and this Wednesday we could even qualify for the knockout stage."

Valencia, Champions League finalists in 2001 and 2002, have not had much of an impact in Europe's flagship club competition since reaching the quarter-finals back in the 2006/07 campaign when they lost 3-2 on aggregate to Chelsea at the quarter-final stage.