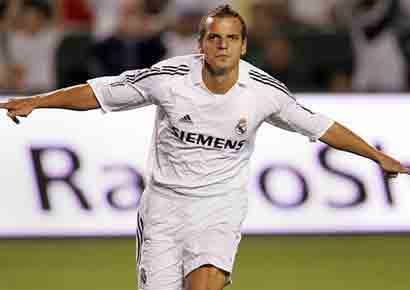 Valencia's Roberto Soldado scored twice in a 6-1 demolition of Bursaspor to lead his side into the last 16 of the Champions League on Wednesday.

Juan Mata set them on their way from the penalty spot after 17 minutes and Soldado, Aritz Aduriz and Joaquin put them 4-0 up by halftime.

Soldado scored his fifth of the competition after 55 minutes and Bursaspor scored their first goal in the group when substitute Pablo Batalla pulled one back in the 68th. Alejandro Dominguez rounded out the scoring for the hosts.

Valencia's win left them second in Group C, three points behind Manchester United with one game left to play between the two group leaders.

The Spaniards, who beat Bursaspor 4-0 in Turkey two months ago, created three early openings at the Mestalla but it was the visitors who should have opened the scoring.

Aritz Aduriz was brought down by for a penalty by Omer Erdogan and Spain's Mata sent the keeper the wrong way from the spot.

Valencia doubled the lead four minutes later with a well-worked move down the right flank, Aduriz pulling back for Mata who played Soldado in behind the defence to score in the far corner.

Jordi Alba crossed low for Aduriz to make it 3-0 at the second attempt in the 30th and Joaquin curled a shot into the top corner before the break.

Soldado grabbed his second, breaking clear to round Dimitar Ivankov and fire into the roof of the net from a tight angle.

Bursaspor striker Batalla forced Valencia's substitute keeper Vicente Guaita into a sharp save in the 68th and quickly followed up with a tap-in from Yildirim's cross.

The ball was soon back down the other end, though, after a long clearance was flicked on and Dominguez banged in Valencia's sixth.