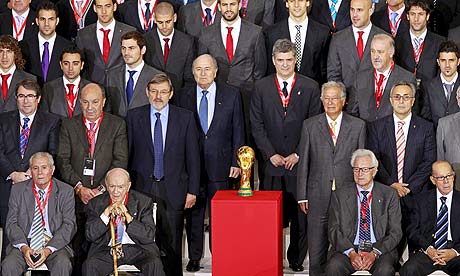 The responsibility of deciding where the 2018 and 2022 World Cup finals will be held falls on the 24-man executive committee of football's controlling body FIFA.

Zurich - But when the committee meets at the beginning of December only 22- members will be eligible to vote - and presumably be present - as FIFA's Ethics Committee on November 17 suspended FIFA vice-president Reynald Temarii and executive member Amos Adamu for one and three years, respectively.

Both officials were caught in a Sunday Times sting operation in which they appeared to be willing to sell their vote for the World Cup, although Temarii was found guilty 'only' of breaching FIFA's code of confidentiality.

That leaves 22 executive members who will decide the fate of the nine bids, involving 11 countries.

The voting will be carried out in two sessions, separating the 2018 and 2022 bids, with a straight majority being enough to win the right to host the finals.

Should the first round of voting not produce a clear winner (12 votes), the bid with the least number of votes in the first round will be eliminated ahead of the second round.

This will continue until such time as a bid receives 12 or more votes.

For 2018, there could be three rounds of voting, as there are four candidates (Russia, England, as well as two co-hosting bids of Spain/Portugal and Belgium/Netherlands).

The host of the 2022 tournament could well be decided by four rounds of voting as there are five candidates (Qatar, Australia, US, South Korea and Japan).

Should there be a deadlock after the final round of voting, with both bids receiving 11 votes, FIFA president Joseph Blatter shall have the casting vote.

The 74-year-old Swiss national has headed the organization since 1998 and is favourite to be re-elected for a fourth term in office next year.

The president of the Argentinian football association Julio Grondona is FIFA senior vice-president, while there are seven other vice-presidents, including the banned Temarii.