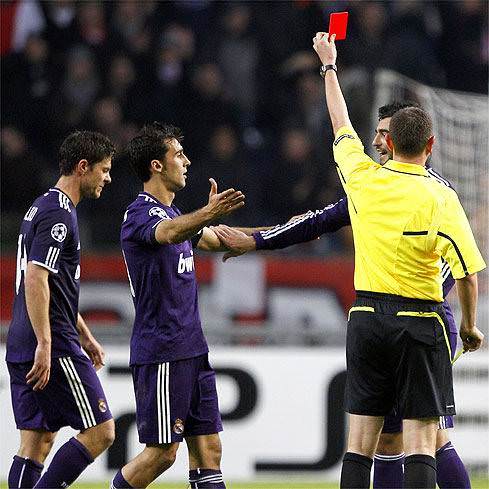 What would happen if the police suddenly declared that petty criminals - small-time shoplifters and tax-dodgers, drunk drivers and the like - would no longer be caught and punished? It's a safe bet there would be public outrage and fears that the foundations of law and order were being eroded.

PARIS (AP) -- Soccer should be no different.

There is an ill-informed school of thought which wrongly theorizes that European soccer bosses shouldn't be too harsh on Real Madrid for the slippery gamesmanship of its coach and players in the Champions League this week.

Those in favor of turning a blind eye like to pretend that midfielder Xabi Alonso and defender Sergio Ramos didn't really do anyone any harm when they contrived to get themselves sent off in the final minutes of Real's 4-0 defeat of Netherlands team Ajax.

Although Real coach Jose Mourinho and his players dismissed the idea that they deliberately courted the red cards, their actions on the pitch suggested otherwise.

By blatantly wasting time - their ham-acting was as exaggerated as comedian Benny Hill, just not so funny - Alonso and Ramos forced, nearly begged, referee Craig Thomson to book them. Alonso slunked off with barely a complaint; after his red card, Ramos went out of his way to shake the referee's hand.

"It looks, frankly, terrible," Arsenal manager Arsene Wenger said. "It gives a very bad image of our game that we don't want."

But wonderfully convenient for Alonso and Ramos. Earlier in the match, both had already been shown yellow cards for fouling. They both got a yellow in previous matches, too, so both now had an accumulated total of two yellows. That was bad for Real, because players who accumulate three cautions in three Champions League matches must then miss a game as punishment.

Mourinho doesn't want to be without Ramos and Alonso when the next, even more financially lucrative knock-out phase of Europe's top club competition starts in February 2011.

Both played on Spain's World Cup-winning side. Mourinho needs Alonso to spray balls from the midfield to his goal scorers up front. He relies on Ramos to guard Real's back.

So it made more sense that Alonso and Ramos take their punishment now, rather than later, when the stakes will be far higher. Earn that third yellow against Ajax, get the automatic one-match suspension quickly out of the way.

Which is what they did. Alonso took an eternity to take a free kick, repeatedly stopping and restarting his run-up to run down the clock. Ramos fiddled with his right sock and similarly dawdled before taking a goal kick. So out came a yellow for both from Thomson which, because it was their second in the game, became a red.

They will now sit out Real's last Champions League group game, a Dec. 8 match against French team Auxerre that Mourinho can afford to lose because his team has already qualified comfortably for the knock-out stage.

Their slate of accumulated cards almost wiped clean (they now have just one yellow each), Alonso and Ramos will be able to worry less about the risk of missing a match in the knock-out stage. They will be able to tackle harder, be a little rougher and play with less caution, safe in the knowledge that they are not so close to suspension.

Blinded by his charisma, Real's supporters suggest that its apparent rule-bending is further proof of Mourinho's "magic."

They argue that Ramos and Alonso committed nothing more serious that the soccer equivalent of telling a white lie, naughty but ultimately harmless and without real consequence.

They say that because there are other, far bigger wrongs in soccer, the misdemeanor of deliberately earning a card isn't worth bothering with. Let the petty criminals go.

As in life, those that police soccer must ensure that the game's rules - all the rules, in both letter and spirit - are respected, at all times, by everyone.

Otherwise, there is no point having rules and bodies to enforce them. Allowing people to think that minor rules can be broken with impunity erodes the authority of the whole rule book. Ignoring minor violations invites bigger violations.

Alonso and Ramos, as World Cup winners, and Real, as the top-earning team in world soccer, should set examples of fair play and sportsmanship, not show how rules can be circumvented.

Soccer is already rife with cynical gamesmanship: players diving in front of goal to try to win penalties, acting as if they're mortally wounded when fouled, pretending they've been hit or elbowed in the face to get opponents sent off.

All the more reason that UEFA should take a stand and throw the rule book at Real if it can prove that it orchestrated the red cards for Alonso and Ramos. UEFA is investigating and plans to hear the case next Tuesday.

Nor should they have to.