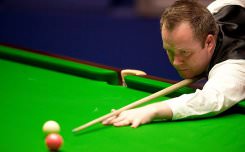 John Higgins produced what he said was his "finest hour" in snooker as he marked his return to top-flight competition by staging a remarkable rally to beat Mark Williams 10-9 in the UK Championship final in Telford, central England, on Sunday.

Higgins had been five frames down and was on the brink of defeat at 9-5 behind, with Welsh left-hander Williams needing just one more frame.

The UK Championship winner in 1998 and 2000, Higgins was playing in his first major tournament since serving a six-month ban for failing to report a match-fixing approach.

And the Scot was also having to contend with the knowledge his father is suffering with cancer.

"I was a man on a mission. I was really determined to try and stop anything which prevented me from winning it," Higgins said.

And it also meant Higgins, beaten in last year's UK final by Chinese cueman Ding Junhui, returned to number one in the world rankings ahead of Australia's reigning world champion, Neil Robertson.

"The best player in the tournament won but I had a chance to nick it and probably threw it away," he added.

Williams, world champion in 2000 and 2003, was a pot away from victory before he jawed what would have been the match-clinching red in the 17th frame.

A safety exchange then ensued before Williams potted a red and a black to go 29 points in front with only 27 left on the table.

But Higgins laid a snooker that saw Williams go in off after he missed the yellow with a serve shot.

And he then cleaned up on the remaining colours before levelling the match at 9-9.

Both players had chances in the final frame before Higgins sealed a dramatic comeback win with a superb double to pot the brown.