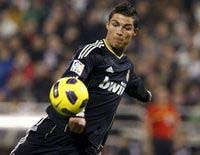 Lionel Messi and Cristiano Ronaldo were locked at the top of the Spanish scoring charts on Sunday as Barcelona and Real Madrid continued their enthralling, high-stakes title duel.

Lionel Messi and Cristiano Ronaldo were locked at the top of the Spanish scoring charts on Sunday as Barcelona and Real Madrid continued their enthralling, high-stakes title duel.

Ronaldo was on the scoresheet in that match to join Argentine master Messi on 17 goals for the season.

"Cristiano Ronaldo is a phenomenal player. He belongs to La Liga and to Spanish fans who watch him on television or in the stands," said Real boss Jose Mourinho.

"He puts on a show in every stadium he visits. Cristiano is a tremendous professional and he scored one of the best goals of his collection."

In Italy, AC Milan won for the 10th time in 12 league games with a 3-0 success at Bologna.

They are six points clear at the top thanks to goals from Kevin-Prince Boateng, Robinho and Zlatan Ibrahimovic.

Lazio failed in their bid to close the gap when Milos Krasic scored a stunning individual winner with the last kick of the game to give Juventus a 2-1 win over the Rome side.

Juve are now in second place.

Milan, who will be guaranteed top spot in a week's time when Serie A shuts down for its winter break, are still in the running for three trophies.

"Everything's possible, we're in the running for all the trophies (league, cup and Champions League), we have to keep going, don't relax, there's still lots of games left so we'll talk about the title another time," said Ibrahimovic, who has nine league goals to his name.

In Germany, Borussia Dortmund picked up their seventh straight win with a 2-0 victory over Werder Bremen.

It was Dortmund's 14th win from 16 games with their only defeat coming on the first day of the season back in August. The result left them 11 points clear of Leverkusen who beat Hamburg 4-2.

Champions Bayern Munich remain 17 points behind, but they were buoyed by the news Bastian Schweinsteiger will stay with the club until 2016.

Lille stayed top in France but only after an injury time goal downed bottom club Arles-Avignon.

With second-placed PSG keeping the wheels on their title push with a 2-1 win at Valenciennes, Lille were in danger of seeing their capital rivals overtake them.

But after Arles had manfully held their own Tulio De Melo popped up with a header in the 93rd minute to earn Lille their eighth win of the campaign.

Third-placed Groningen are just two points behind leaders PSV Eindhoven after Tim Matavz scored both goals in a 2-0 home win over AZ Alkmaar.

Ajax are a further point back in fourth spot after Christian Eriksen's 11th minute goal was enough to secure a 1-0 win at Vitesse Arnhem.

PSV, who were held 0-0 at De Graafschap on Saturday, stay top with a one-point lead over FC Twente.