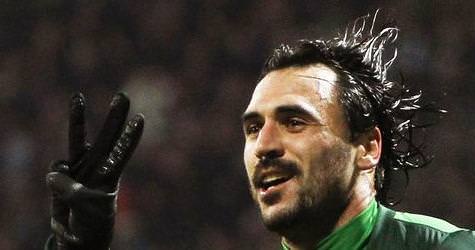 Portugal forward Hugo Alemeida could be on his way to Istanbul in January as his German Bundesliga club Werder Bremen confirmed interest from Besiktas.

Bremen sports director Klaus Allofs told Tuesday's edition of the local Kreiszeitung Syke paper that Besiktas have inquired about a transfer and that Bremen are ready to let him go.


Allofs said that he was upset with Almeida about a recent red card and his financial demands as well in recent contract talks. Almeida's current deal ends after the season.


"I am convinced that we will find no solution to renew his contract," Allofs said, adding that "we are miles apart" on financial issues.


Allofs said that Besiktas, who are coached by German Bernd Schuster, have Almeida "on their radar" and approached Bremen via a middleman.


"We will deal with it once figures have been given," said Allofs.


Bremen are enjoying a poor season, languishing in 14th place in the Bundesliga and eliminated from the Champions League.