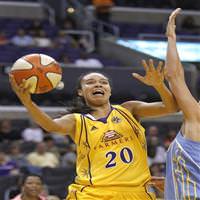 Spokesman Altan Sokmen says on Friday that Toliver is expected to arrive in Samsun, on the Black Sea coast, next Tuesday and sign a contract.

"She will be one of the best players to come to Samsun," Sokmen says.

Samsun is eighth in the 12-team standings, five points behind leader Fenerbahce, and is hoping for a quick improvement with Toliver.

"We are hoping that with Toliver, we will overcome some playmaking issues," says Samsun manager Sait Uzun.

Toliver, a backup for the Sparks, averaged 8.6 points and 2.2 rebounds this year, her second in the WNBA.