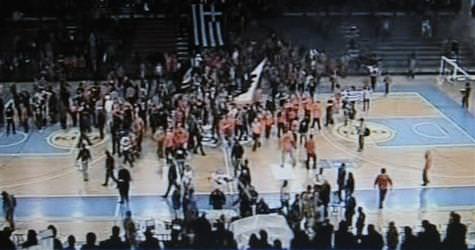 Turkey’s prime minister slammed Tuesday an attack on a Turkish basketball team in Cyprus as the sign of rising Greek Cypriot “racism” that threatens peace efforts in the long-divided island.

Recep Tayyip Erdogan also criticized what he described as an inadequate EU reaction to the incident, and denounced as too lenient the fine slapped on the Greek Cypriots by FIBA, the international basketball federation.

"It is worrying that racism and violence against Turks … is rising in Greek Cyprus while we are striving for dialogue and reconciliation," Erdogan said in a weekly speech in Parliament.

"Even this single incident demonstrates who favors peace and who does not want to give peace a chance in the island," he said.

Erdogan also criticized the European Union for its "inadequate" reaction to the incident.

A Eurochallenge cup game on December 21 between hosts APOEL Nicosia and Turkey's Pinar Karsiyaka ended in violence as local fans threw objects at the visiting team, poured on to the court and clashed with police.

"We expect more satisfactory statements especially from the European Union – both on this incident and the racism and hatred that is being fanned in the island," Erdogan said.

"The penalty given to APOEL is not sufficient," he said, and referring to FIBA added: "If this is their justice … then they should not speak about fair play."

A FIBA tribunal fined APOEL 40,000 euros ($52,000) and ordered them to play their next European home matches behind closed doors.

Three teens have been charged over the incident, with investigators trying to identify more suspects.

Cyprus has been divided between its Greek and Turkish communities since 1974 when Turkey occupied the north in response to an Athens-engineered coup in Nicosia aimed at union with Greece.

The Greek Cypriot government in the South is internationally recognized with the exception of Turkey, the only country to recognize the self-declared Turkish Cypriot statelet in the North.

In September 2008, the United Nations launched fresh peace talks between the two sides, with no tangible progress so far.