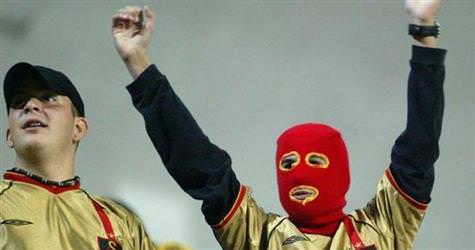 The government this week submitted to parliament a set of draft proposals that foresee up to 12 years in prison for match-fixing or corrupt betting charges, four years for doping charges and up to three years for fans chanting obscenities and racial slurs.

The proposals, which aim to punish individuals involved in hooligan acts and not just the clubs, were available on parliament's website Thursday.

If approved, fans attempting to bring guns, knives or other sharp objects to sports events face a yearlong jail term. Even those attempting to enter stadiums without tickets face prison terms, while convicted hooligans would be barred from traveling abroad.

The proposals were drafted more than a year ago but were put on the back burner as Turkey grappled with other pressing legislation.

Minister Recep Tayyip Erdogan submitted the proposals to parliament this week. Erdogan was angered by two football-related incidents, including an attack on Fenerbahce players by Galatasaray fans during a men's under-17 match in Istanbul on Sunday, private NTV television reported.

Earlier this month, two Bursaspor fans were stabbed and hospitalized and police used batons and tear gas to disperse crowds when street-clashes occurred prior to a Bursaspor and Besiktas league match.

The proposed changes were expected to come to the floor for debate before the start of the second half of the football season in late January.

Fans frequently light up flares, yell out obscenity-ridden slogans to taunt and intimidate opposition teams and referees. Switchblades, long knives used for cutting meat and even Samurai swords are sometimes smuggled into stadiums.

With the new bill, fans would purchase tickets using their government ID numbers, making it easier to track and punish troublemakers.

The draft bill also aims to tackle corruption in Turkish sports marred by bribes to players and fees paid to give teams incentive to defeat rivals. Individuals involved in such practices would be punished with between five and 12 years in prison while club officials and betting companies could get a maximum of 18 years.

Turkey is at the center of a European match-fixing scandal, currently under investigation by police in Germany, in which 270 matches in at least nine domestic leagues and international competitions are under suspicion.