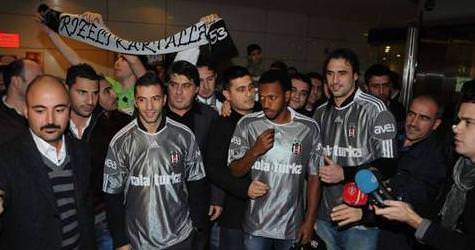 Beşiktaş’s new Portuguese players; Almeida, Simao and Fernandes arrived to Istanbul by private plane last night. However, the turbulence was felt on the ground yesterday as fans rocked the airport in excitement to welcome the team’s new stars. The real show will take place tonight at a special training session to be held at İnönü Stadium.

Beşiktaş fans waited for hours in Istanbul's Atatürk Airport to welcome the three new Portuguese internationals to join the team, Almeida, Simao and Fernandes.
By adding three new Portuguese players, Hugo Almeida, Simao Sabrosa ve Manuel Fernandes to their previous transfer of Quaresma, Beşiktaş is starting off the second half of the season as they did the first, in a whirlwind.
Team manager Cengiz Zülfikaroğlu was accompanied by Ricardo Quaresma to accompany the three Portuguese players by private plane from Lisbon into Istanbul. Their arrival resembled an earthquake as the ground rattled with the fans' anticipation. It was so intense the windows of the entrance doors as well as the vehicles the players got into shattered. Surprised at the response to his arrival, Almeida stated; "We will do all that we can to make the fans happy." Last night the footballers attended a basketball game in Akatlar.
Today, after undergoing a medical check-up this morning, the players attended a signing ceremony held at Ümraniye and tonight they will come out to train in front of the fans in İnönü Stadium.
Fernandes 4, Simao 31, Almedia 34
BEŞİKTAŞ'S new transfers, Hugo Almeida, Simao Sabrosa and Manuel Fernandes have all been designated their respective uniform numbers. Fernandes has been assigned the number 4, Almeida will sport number 34 and Simao will play in a number 31 uniform.