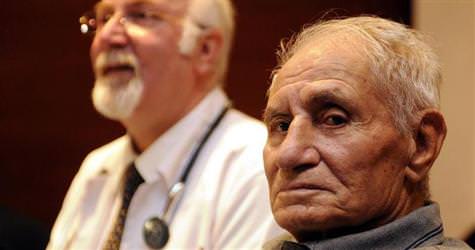 After suffering a heart valve issue and spending the week in Memorial Hospital, Fenerbahçe legend Lefter Küçükandonyadis was released yesterday. Eighty-six year old Lefter was taken to the Prince’s Island’s Büyükada by the Horoz Reis ambulance boat belonging to the Prince’s Islands Municipality.

Lefter responded to the comment made recently by CHP Chairman Kemal Kılıçdaroğlu, in which he stated; "I became a Fenerbahçe fan because Lefter was such a great goalkeeper." Lefter jokingly stated, "I'm glad he didn't say anything else, I was not a goalkeeper and if I had been I would have suffered a lot of goals."

Lefter was greeted by Prince's Islands Mayor Mustafa Farsakoğlu as well as a number of island residents, and by the time he arrived to his home on Lalahatun Street, he had become emotional.
.