Years of longing for the cup continues... 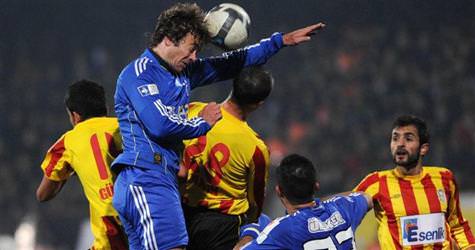 Fenerbahçe has now lost all chances of passing through the group stage in the Ziraat Turkey Cup, with last night’s loss by 2-1 to Yeni Malatyaspor. With these results, Fenerbahçe goes into their 28th season of longing for a Turkey Cup title.

Yeni Malatyaspor, a contender from the Spor Toto second league, is rejoicing with their win against Fenerbahçe last night. With three losses out of three games played, this year Fenerbahçe departs the cup competition with an unprecedented performance.
While officially saying goodbye to the cup, Fenerbahçe also suffered one more of the most unbelievable losses ever against Yeni Malatyaspor, bringing their success in the group stage to three losses out of three games played.
In the 24th minute, Malatyaspor's Cem had an opportunity with a center pass, however it was Okan that scored the goal into his own goalpost, bringing last night's hosts up by one. Fenerbahçe retaliated fast with a corner shot by Stoch, which made its way to Niang with Lugano scoring the fast recovery, bringing the score to 1-1.
It wasn't until the 72nd minute that their fate was written with Cem coming face to face with Mert and shooting the ball right between the Fenerbahçe goalie's legs to score the victory goal, bringing Malatyaspor up at 2-1.
LONGING FOR THE CUP CONTINUES…
FENERBAHÇE is still unable to put an end to the clubs' longing for a Turkey Cup win. With three losses suffered from the three games played in the Ziraat Turkey Cup, they have also displayed their worst performance ever in the group stage. Fenerbahçe has had two first in this year's Ziraat Turkey Cup, first by exiting the cup in the group stage and secondly, by bringing the club's longing for a cup win up to 28 years.