First show in the Arena 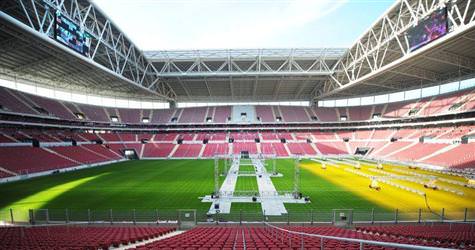 As Galatasaray says farewell to Ali Sami Yen, tonight they welcome in their new home, the Türk Telekom Arena. This evening Galatasaray hosts Ajax for the stadium’s opening, and six-hour show.

Galatasaray's 15 years of longing for a stadium comes to an end this evening. After saying goodbye to their beloved Ali Sami Yen stadium within the week, tonight, the club says 'Hello' to the three-years-in-the-making Türk Telekom Arena.

For tonight's opening in Seyrantepe, Galatasaray will be facing off against the Dutch team Ajax. This historical game will kick off at 20:45 and will be broadcasted live on the D Smart-Euro Futbol channel.

Referees Fırat Aydınus, Serkan Ok and Orkun Aktaş will be on duty tonight with Serkan Çınar serving as fourth referee.

NEW HOPE FOR ASLANTEPE
It appears the extravagant opening ceremony may overshadow the first game to be played in the Türk Telekom Arena. Tonight's magnificent show starts at 18:00 and will come to a close at midnight tonight. After experiencing the worst start to the season in history, tonight Galatasaray comes out to face fans in Seyrantepe with a new uniform and new hope. With a capacity of 52,647 spectators, the Türk Telekom Arena is expecting to host 40,000 fans tonight.

FIRSTS CAME FROM KAZIM AND BARIŞ
Yesterday; Galatasaray held their first training session under Hagi's coaching in the Türk Telekom Arena. In addition to Kewell and Neill, who were absent due to obligations with the Australian National Team and Asian Cup, Pino, Baros, Gökhan Zan, Çağlar and Mehmet Batdal were also out on injuries. During the training session, Barış rose to catch the ball alongside Culio, however landed badly, thereby becoming the first player to be injured in the new Türk Telekom Arena. Kazım was the first to score a goal. In fact during the session, Galatasaray Club President Adnan Polat turned to members of the press to joke, "write this. The first goal scored in the Türk Telekom Arena was by Kazım."