The season’s second half kicks off tonight! 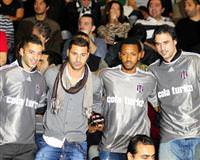 The second half of the Spor Toto Süper League begins tonight after a 32-day break with a heavily loaded Beşiktaş against Bucaspor.

Having added a series of Portuguese stars to the team by the likes of Almeida, Fernandes and Simao in addition to Quaresma, Beşiktaş plays hosts to Bucaspor in the FİYAPI İnönü Stadium tonight. With 14 points dividing them from the league leaders, Beşiktaş hopes tonight will be the start of a 13-game winning streak in order to make up the difference..
The team's new transfers will be coming out to play for fans tonight in İnönü Stadium for the first time. The team's supporters are also in preparation for the special event as they have supposedly prepared a number of welcoming tricks for Almeida, Fernandes and Simao. Fans will not be forgetting Guti however and in addition to cheering on the new Portuguese 'gang', they also plan to perform a special chant for the Spanish player.


A SPECIAL GUEST IN THE STADIUM TONIGHT
Not only will Beşiktaş's administration be in full attendance but according to sources, there will be another guest in the tribunes tonight. Supposedly Portugal's National Team trainer, Paulo Bento will also be attending the game, in which four Portuguese players are in the line-up, in order to determine his own team for their national game against Switzerland on February 9th.