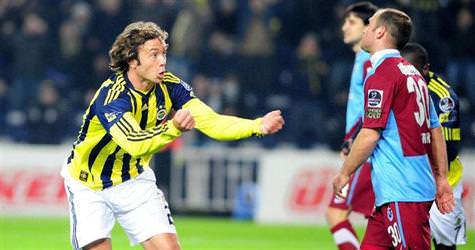 The canaries have set their sights on the peak of the league with last night’s 2-0 win against leaders Trabzonspor. In just two weeks, Fenerbahçe has brought their previous nine point difference down to just four. Last night’s goals by Lugano and Niang put a stop to the storm.

The long-missed Fenerbahçe, since the start of the season, returned last night with the starting whistle. On the one hand it was as if Fenerbahçe were taking their revenge for last year's championship loss against Trabzonspor, while on the other hand last night's game was an opportunity for the hosts to have a second start to this season's league.
Last night all the pebbles were in place for Fenerbahçe… Killer balls from Alex coupled by the exhaustive efforts of Gökhan, Selçuk and Dia to harass their rivals successfully stopped Trabzonspor from securing practically a single position in the first half.
The first goal for Fenerbahçe came in the 20th minute from a corner shot by Alex which Lugano scored with a header. Just three minutes later, Fenerbahçe came back for seconds with a ball snagged by Gökhan, which Mehmet centered beautifully for Niang to follow through, bringing the score to 2-0. It was at this point that Trabzonspor wised up. Had they opened up, Fenerbahçe could have scored even more.
The guests waited for their rivals to tire, however this took awhile. The second half of the game was tense. Both thrown out for receiving two yellow cards each, the loss of Selçuk and Glowacki made the workload more difficult for their comrades. The fact that Fenerbahçe is where they're at in the league makes it understandable they would be so cautious playing in the Şükrü Saraçoğlu Stadium. However, their closing in tightly and their smart play left little chance to Trabzonspor. In the 66th minute, a free shot from Selçuk, which Volkan dribbled only for it to go out, was the most clear shot the leaders had the entire game.
Güneş' had probably not accounted for Fenerbahçe to have such fervor and to sustain it throughout the game. Last night's hosts displayed just how much they wanted the win and how for them, they were getting a new start to the league. Fenerbahçe has now officially signed on to the race for the championship. The importance of '90 minutes' of unconditional support from the tribunes was made evident once again last night. Should this tempo continue, then so will support for technical director Kocaman. For Trabzonspor however, over the past two weeks, they have now open-handedly wasted their league lead which may mean it's time for some 'internal accounting'.
Diego scores his fourth goal
Diego Lugano, the player to open the curtains for Fenerbahçe last night, scored his fourth goal this season. The Uruguayan footballer had also scored his first goal this season against Trabzonspor. Lugano is now the fourth highest scorer on the team following Niang, Alex and Semih.