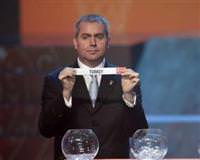 A crippling financial crisis, lack of accommodation and unfinished stadium should not effect Lithuania's ability to host the largest Eurobasket tournament in September, European basketball officials said on Sunday.

The basketball-obsessed Baltic state of 3.3 million is to host the largest Eurobasket tournament from August 31-September 18 with 24 teams competing. The top two teams qualify for the 2012 London Olympics.

The country has been hit by the worst economic crisis since it broke away from the former Soviet Union in the early 1990s, while the main 14,500-seat arena in Kaunas, where the finals are to be played, is still under construction, but expected to be completed in May.

The country is also suffering an accommodation shortage with Panevezys, a town of more than 100,000 that will host Group A matches, has four hotels with just 97 rooms in total.

FIBA Europe officials, however, said they were confident Lithuania would be well prepared.

"The organisation is going to be superb... the government is backing all of this, and consequently I am confident that we will have the best Eurobasket ever," Nar Zanolin, FIBA Europe secretary general told journalists at the glitzy televised draw for the tournament in Vilnius on Sunday.

"We feel that more teams will add more to the Eurobasket... it involves a lot more countries and consequently more spectators."

The hosts have won the title three times -- the last of which was in 2003 -- and were given a tough draw in Group A with European champions Spain and Turkey, Britain and Poland though the country's Prime Minister Andrius Kubilius was confident.

"We love basketball and we love to win," he said at the draw at the National Drama Theatre in Vilnius.

Lithuania last hosted the championships in 1939 in Kaunas, and it was poignant it was returning there with an expanded competition, FIBA Europe president Olafur Rafnsson said.

"It's symbolic that we start a new era of more teams exactly here," FIBA Europe president Olafur Rafnsson, said at the draw ceremony.

"For Lithuania basketball is more than a sport, it's a part of the culture."