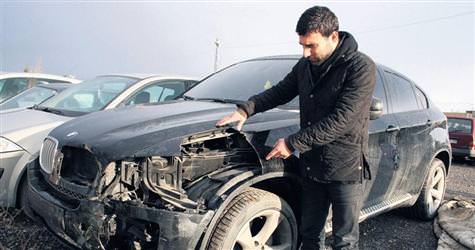 Fenerbahçe’s Bilica has confessed to being behind the wheel during the hit and run accident in Beşiktaş.

Suspecting that a Fenerbahçe player may have been the ghost behind the wheel in an accident in Beşiktaş early Monday morning which resulted in the injury of a motorcycle courier, police conducted an investigation of the footballers who were out in Ortaköy that night, celebrating Fenerbahçe's victory against league leaders Trabzonspor. The vehicle in question was found by police in Bilica's garage. According to his attorney, Bilica confessed to being intoxicated and scared and therefore he fled the scene, and stated that he regrets his actions. Police took Bilica's statement last night.
SABAH broke the news yesterday of the accident which took place at 6:45 am Monday morning on Barbaros Boulevard in Beşiktaş. Bilica's vehicle crashed into motorcycle courier Feysel Taşkın who was thrown onto the hood of another vehicle as a result of the impact. The vehicle which caused the accident fled the scene; however the entire hit and run was recorded on MOBESE cameras.
The vehicle's front license plate had also fallen off at the scene of the crime and police used the plate number coupled by the camera footage to further investigate into the incident. At first it was revealed that the vehicle had been registered to former Fenerbahçe player Roberto Carlos, however he left the car to Bilica upon his departure. Certain eyewitnesses claimed Fenerbahçe Captain Alex was at the wheel. That night a number of footballers were returning home in the early morning hours after celebrating into the night at Ortaköy's Supper Club following their victory against league leaders Trabzonspor. The perpetrator was unable to be determined from the footage taken from a number of MOBESE cameras because the vehicle had darkened windows, however police teams decided to pay a visit to each player that had been out that evening celebrating. When they arrived at Bilica's villa in the Tuzla Milenyum Residences, they saw that his vehicle had significant damage on the front hood. Upon this finding, Bilica's attorney stated that yes it was Bilica behind the wheel and that he would be coming to the police department to provide a statement. Later in the evening, Bilica did indeed go to the Beşiktaş Police Department, where he was questioned for an hour and subsequently released.
The story covered SABAH's headline yesterday, however the Fenerbahçe Football Club refused to comment on the incident. The victim, Feysel Taşkın, has since been discharged. Supposedly after the accident, Bilica called his lawyer to say, "I was under the influence, I panicked, and ran because I was scared. Meanwhile it turns out that the Supper Club had erased all footage depicting the players exiting on the night in question.
Bilica has played with Fenerbahçe for two years now. The 32-year-old player was transferred from Romania's Cluj and in the past has played for the likes of Venezia, Brescia, Palermo, Ancona and Köln. Two years ago, Fenerbahçe transferred Bilica from Sivasspor. In the 2000 Sydney Olympic Games, Bilica donned a uniform with fellow patriots Alex, Ronaldinho, Lucio and Kaka. Bilica, who is illiterate, has eight children.
In an unrelated story, Fenerbahçe footballer Diego Lugano was pulled over by police in Beşiktaş and requested to take a breathalyzer test. The incident took place at around three am the night before last as he was returning home from dinner in Ortaköy. Lugano refused at first and when he saw the cameras he said, "Okay, show' and insisted his translator arrive. The footballer waited for his translator by having tea at a local stand and taking photos with fans. When his translator arrived and spoke with police, he told Lugano that if he didn't take the breathalyzer test he would have to undergo a blood test. Convinced at this point, Lugano did indeed take the breathalyzer test, which came out at 0.12 promille, which is well under the legal limit of 0.50 promille. According to the police, this result does not mean that the player had consumed an alcoholic beverage, "He could have received the same results from a glass or two of orange juice," they stated.