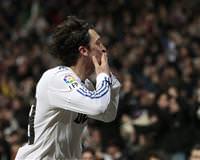 Having not won the cup in 18 years, the fact that a goal by Ozil has brought the team closer to a victory was not overlooked by onlookers as his success was noted in a number of Spanish newspapers today.
Sami Khedira's superb pass from central midfield sent Mesut Ozil clear and he rounded goalkeeper Javi Varas to finish into the empty net, scoring Real Madrid's first goal last night in the 82nd minute.
Last night's victory was capped off by Emmanuel Adebayor who made his home debut and scored in the last minute in overtime making the aggregate 3-0 in Real Madrid's favor. It appears archrivals Real Madrid may be fighting for the Cup win and if so it would be a final that would take plays just days after the two greats meet in the league.