Lions suffer another wound in the cup with 2-3 loss 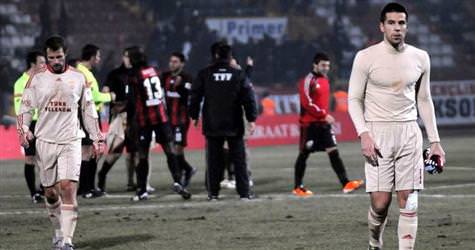 Galatasaray lost to hosts Gaziantepspor last night by 3-2 in their first semifinal game in the cup. Considering the Ziraat Turkey Cup victory as their last chance to play in a European league, last night’s loss has caused double the injury.

The fact that two of Gaziantepspor's goals were scored by Cenk Tosun, a player Galatasaray lost to Gaziantepspor when they failed to pay 500,000 Euros for his transfer fee 20 days ago, was what also hurt. With two breathtaking goals by Cenk Tosun and a third by El Yasa, Gaziantepspor took the victory over Galatasaray's two goals scored by Kazim and Stancu.
For Galatasaray winning the Turkey Cup is their only hope of being able to play in Europe as the team's standing in the league leaves little less to be desired. Last night's loss marked the tenth suffered by Galatasaray in official games played this season. Meanwhile, the result for the Ziraat Turkey Cup's other contenders who played last night was Gençlerbirliği: 2 – Bucaspor: 0.