Four matadors in the Arena 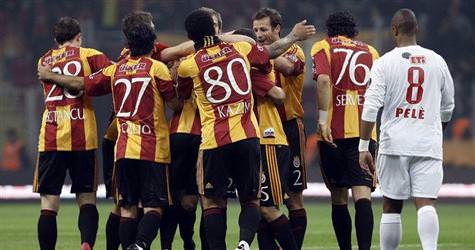 Having broken off from the league race for the championship, Galatasaray managed to break apart Eskişehirspor last night in a 4-2 win.

Galatasaray took a 3-0 lead with goals scored by Cana, Stancu and Kewell in the first half of last ngiht's game. In the second half, Eskişehirspor had a comeback with two back to back scores by Burhan and Unit Karan, bringing the score difference down to just a single goal. Then, striker Baros came through, breaking a four-month fast, to score the final and fourth goal for Galatasaray. Last night's league victory marks two wins out of two games played in the brand new TT Arena. Playing their best game this season and securing three points in the league was the team's gift to technical director Hagi on his 46th birthday.
Chairman Adnan Polat's scolding following Galatasaray's recent loss to Gaziantepspor in the Turkey Cup may have worked. In response to Polat's statement, "players who just stand on the field have no place on this team," Galatasaray displayed some amazing skills in the first half of last night's game against Eskişehirspor. They ran, they exerted pressure; they helped each other out and played a team game, the result of which brought them three goals up.
Within ten minutes of the starting whistle, Galatasaray had scored. Sabri's strong strike from 30-meters' distance was met with a header by Cana to bring the hosts up by one in the 10th minute. Their second goal came just three minutes later. Kazım's sweet center pass reached the penalty field for Kewell to jump over and Stancu to strike. The third goal came in the 44th minute from a pass by Hakan which Kewell shot this time, and goalkeeper Atilla, who replaced an injured Ivesa after the second goal, was unable to save.
Everyone assumed the second half of the game would be just as easy for the hosts; however that was not the case. After the 60th minute of the game, Galatasaray appeared to just stop. In the 75th minute, Eskişehirspor's Burhan scored the team's first goal. In the 77th minute, former Galatasaray player Ümit Karan brought the score difference down to just one, when he scored from a free shot. Suddenly the win was not so secure… However, in the 81st minute Baros put an end to any apprehension by completing a wonderful assist by Kazım with a header. Stating, "I'm back" Baros' score allowed his team to breath once again. Galatasaray's game last night, coupled by the return of a number of injured players, was a good sign the team may be slowly exiting their crisis. The early return of Arda and Pino will especially make things easier for technical director Hagi.