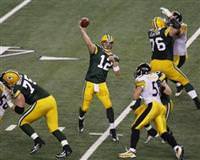 The Green Bay Packers reclaimed the greatest prize in North American sport when they beat the Pittsburgh Steelers 31-25 on Sunday to win the 45th Super Bowl.

Inspired by their dynamic young quarterback Aaron Rodgers, the Packers gave a masterclass demonstration, opening up a 21-3 lead in the second quarter and then showing amazing courage to survive a ferocious late comeback from the Steelers.

It was game that lived up to all the hype as two of the most successful franchises in the NFL slugged it out in front of a crowd of more than 100,000 at Cowboys Stadium.

They scored seven touchdowns between them but it was game characterized by hard-hitting defense as both teams lost key players, including Packers receiver Donald Driver and his team mate cornerback Charles Woodson, to injuries.

"We just kept battling. We had some adversity, we lost some guys to injuries and we had some rough plays out there," Packers head coach Mike McCarthy said.

Rodgers, who emerged from the shadows of his predecessor Brett Favre, was named MVP after completing 24 of 39 passes for 304 yards and throwing three touchdown passes but there were plenty of other worthy contenders for the award.

Greg Jennings scored two touchdowns, Jordy Nelson scored one (among his nine receptions) and Nick Collins intercepted a wayward pass from Ben Roethlisberger and raced 37 yards for a TD in the first quarter that gave the Packers a 14-0 lead.

The Steelers, who were chasing a record seventh Super Bowl win, were brave in defeat.

They never led but pulled to within 28-25 midway through the fourth quarter when a costly turnover, their third of the night, handed the momentum back to Green Bay.

"We came here to win the football game and of course we didn't do that."

For the Packers, it was their fourth Super Bowl win. Only the Steelers (six), Dallas Cowboys and San Francisco 49ers (five each) have won more.

With a population of 102,000 Green Bay is the smallest city in the U.S. with an NFL team but few franchises have a more sentimental attachment to the Super Bowl than the residents of Wisconsin.

The Packers won the first two Super Bowls, in 1967 and 1968, and the Vince Lombardi Trophy, which is presented to the winning team, is named after their legendary coach.

Although the Packers were the slight favorites to win Sunday's game, they overcame some incredible obstacles just to get to the big one as the casualties starting mounting up during the season.

They needed to win their last two regular season games to secure a wildcard berth into the postseason and then win three playoff games on the road to win the NFC championship.

Green Bay threatened to turn the game into a rout when Rodgers picked out Jennings in the end zone with a superb 21-yard pass to give the Packers a 21-3 second-quarter lead.

A second Jennings touchdown gave the Packers some breathing room at 28-17 but the Steelers set up a grandstand finish when Mike Wallace collected a 25-yard touchdown pass from Roethlisberger and Antwaan Randle El completed a two-point conversion.

However, a 23-yard field goal from Mason Crosby with just over two minutes left gave the Packers the six-point lead they maintained until the end as the Steelers failed to mount one last challenge.

"The smallest city in the league has won the biggest game."

While the game did live up to all expectations, there was some embarrassment for the NFL when more than 400 fans were unable to get in to the $1.2 billion stadium because they ran out of temporary seats.

The NFL paid them each three times the face value of their tickets and ordered an investigation into the mix-up.

Grammy winner Christina Aguilera also fumbled a line of the national anthem during the pre-game presentation but the Black Eyed Peas performed a dazzling half-time show watched by an estimated television audience of more than 100 million.