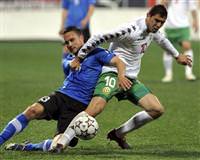 The Bulgarian and Estonian soccer federations want UEFA to investigate their international friendly in Antalya, Turkey, on Wednesday after the match ended 2-2 with all four goals coming from the penalty spot.

"The situation becomes even more confusing taking into account the fact that all three goals in the previous match were also scored from penalties."

Latvia beat Bolivia 2-1 in a friendly in the Mediterranean resort of Antalya just before the Bulgaria-Estonia game.

Hungarian referee Krisztian Selmeczi was in charge of both matches.

"We don't know this referee and we can't say he acted intentionally when awarding the penalties," said BFU vice-president Atanas Furnadzhiev. "We'll inform UEFA and they will probably investigate the match."

"The friendly was organised by an agency with whom we'll not work anymore," Estonia FA spokesman Mihkel Uiboleht told local media.

"We received information of a possible manipulation even before the game as the same agency also organised the match between Latvia and Bolivia and there was the same scenario there."

Uiboleht told Bulgarian state television the "necessary information" had been sent to soccer's European and world governing bodies. UEFA could not be immediately reached for comment.