Alex: “I am where I belong” 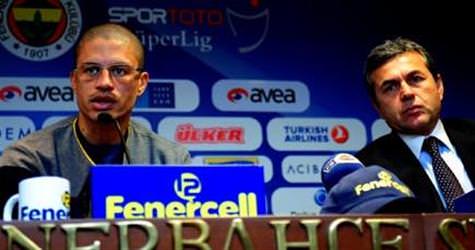 Having written his name on to a number of records in Fenerbahçe history, Alex De Souza has signed on to another two years to play for the club. Signing his fourth contract for the team, the Brazilian player says, “I stayed where I feel right” Alex will earn upwards of three million Euros a year.

On Wednesday, the never-ending story of whether Alex De Souza would continue on with Fenerbahçe, successfully reached a happy ending as the captain signed on to another two years with the team. Having played for seven seasons with Fenerbahçe and signed on to four contracts, the 33-year-old Brazilian footballer will now play for another two years at 2.8 million Euros a year. During a signing ceremony with the team's technical director Aykut Kocaman, Alex answered questions from the press. Stating that it didn't take long for both sides to reach an agreement, Alex said, "Together we have extended this story, which we began together in 2004. I also want to thank our fans, which have shown me endless support. My objective from here on out is to be an asset for the team and the club."
Last Update: Feb 12, 2011 1:52 pm
RELATED TOPICS