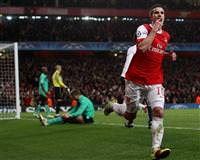 England’s Arsenal hosted Spain’s Barcelona in London. Despite falling 1-0 down, Arsenal brought up the rear and managed to beat the indelible Barcelona by 2-1.

The goals that gave Arsenal the win were scored by Van Persie in the 78th minute and by Russian star Andrey Arshavin in the 83rd minute. Barcelona's sole goal was scored by David Villa with an assist by Messi.
Last night's other Champions League game played for the last 16 first leg clash was between Italy's Roma and Ukraine Shakhtar Donetsk. Hosts Roma lost by 3-2 to a well-deserving Shaktar Donetsk.
The return leg for last night's matches will be played on March 8th. The winning teams will go on to play in the quarter finals.