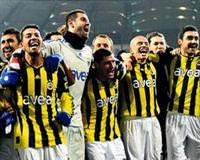 Fenerbahçe started out with a goal and Rüştü and the goal post stopped them from going even further. Beşiktaş then took the stage bringing the score up to 2-1 for the hosts. With Almeida’s failure to pull through and Ferrari’s red card, Beşiktaş broke down. Fenerbahçe’s captain Alex took the wheel, scoring a hat-trick last night to take Fenerbahçe all the way to the top of the league, albeit due to an extra game.

After losing a total of eight points in four games played in the second half of the season, despite a series of flashy transfers, and an upsetting loss in the UEFA Europa Cup by 4-1 to Dinamo Kiev earlier this week, Beşiktaş hoped to put a stop to their hard times by claiming a victory in last night's derby.
Following by 15 points to league leaders Trabzonspor, and currently in sixth place, Beşiktaş hoped to make last night's first Spor Toto Super League derby in 2011 their exit strategy by beating archrivals Fenerbahçe, which have been on a winning streak with four out of four matches won since the start of the second half of the season. This of course was not the case as visiting team Fenerbahçe managed to beat the home team Beşiktaş by 4-2 in Istanbul's Fi Yapi İnönü Stadium.
It was a black and white night… Beşiktaş wore black and Fenerbahçe represented white… There was a lot of back and forth. Fenerbahçe started off the night and Beşiktaş caught up, taking the lead. Then Fenerbahçe's eagles took flight!!! The breaking point was the moment Ferrari was thrown off the field. The Italian not only finished off Beşiktaş for the night, but his actions were like a lottery win for Fenerbahçe.
From that moment on, Fenerbahçe swept off with the game. Captain Alex became the maestro transforming leading Fenerbahçe all the way to the top spot of the league, albeit with a game up on previous league leaders Trabzonspor who play against Manisaspor tonight.
Schuster's choices were questionable. The wind is certainly blowing in the wrong direction for Beşiktaş at the moment. Did anyone see Almeida in the game for the exception of the one sure shot he missed? The game started off head to head. In just the 4th minute, Fenerbahçe had already scored in İnönü. Alex cut throughand Selçuk managed to break Toraman and Ernst's rhythm. Necip sent the ball into his own goalpost, bringing the score to 0-1. In the 20th minute, Niang bypassed two rivals in the middle field, taking the ball along with him 60 meters with not one Beşiktaş player able to stop him. Rüştü turned his shot into a corner. In the 24th minute Dia took the stage. His strike hit the side post to fall back into the penalty field. Thirty minutes later Beşiktaş evened out the score. In the 44th minute, Ekrem made it past Santos and took one look at the goal post to strike a beautiful shot Volkan was not expecting. He hit the ball with his left foot sending it straight into the goalpost, bringing the score up to 1-1.
ALEX'S TEN MINUTE HAT-TRICK
The second half of the game left everyone out of breath. In the 49th minute, Simao's free kick got caught up in Fenerbahçe's defense, Toraman found himself right in front of the ball and made such a strike it was as if he was taking the stress of recent days out on the ball: 2-1. In the 60th minute Almeida had a clear shot to score the team's third goal, but missed. In the 64th minute Ferrari elbowed Lugano and got himself thrown out of the game. Alex evened up the score with a penalty shot: 2-2.
Now Beşiktaş only had ten players remaining. Topuz had a position in the 70th minute; however it hit the goalpost only to go out. In the 72nd minute, Emre's center pass was responded to with a header by Alex, whom from then on out conquered İnönü; 1-3. In the 75th minute, Alex scored his third goal of the night which went straight past goalie Rüştü: 1-4. With last night's results, Fenerbahçe not only knocked out their archrivals, but they also became the league leaders with an extra game.