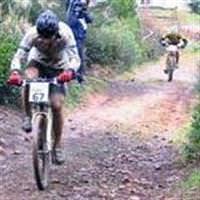 Çekmeköy, known for its array of every tone of green and abundant oxygen was the site of the third stage of the "Çekmeköy Mountain Biking Competition” last Sunday.

The technical infrastructure for the Çekmeköy Mountain Biking Competition was arranged jointly by the Çekmeköy Municipality and Kaçkar Bicycle. The competition took place with approximately 120 athletes including members of the national bicycling team.
Despite the rain, the bicyclists competed on the eight-kilometer course to place for the next round and were given medals. At the end of the fourth stage, bicyclists who make the top three spots in six categories will receive a combined 15 TL award. The final stage of the bicycling competition will be held on Sunday March 13th, 2011.