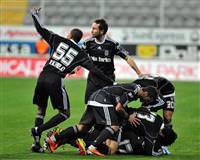 Last night Beşiktaş capped off the 23rd week of the Spor Toto Super League with a 2-0 win against Antalyaspor.

After throwing in the towel to Europe aspirations and freezing in Kiev, last night Beşiktaş finally had a chance to breathe in the Mediterranean evening air and reminisce in victory.
With the team's last win in the league against Bucaspor, Monday evening , with goals scored by Guti and Ekrem, Beşiktaş managed to take a win home the night prior to the club's 108th anniversary. The game's goals came in the 57th minute with Ekrem and in the 80th minute with Guti.
With four weeks behind them without a win and both league and Europa Cup aspirations astray, Beşiktaş next plays against Gaziantep Buyuksehir Belediye on Wednesday March 3rd at 20:00 at the Kamil Ocak Stadium for the Turkey Cup.
The weekend following, Beşiktaş faces off against Trabzonspor at home for a Sunday night March 6th game which will kick off at 19:00.