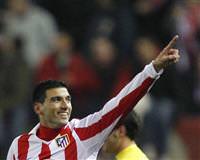 According to Spain’s El Mundo Deportivo newspaper, Beşiktaş, which has already drawn European attention for recent transfers, is in a race against Inter to sign Spanish footballer Jose Antonio Reyes.

Another Spaniard to soon join the Beşiktaş crew… Spain's El Mundo Deportivo reports that Beşiktaş is currently competing against Inter to sign Jose Antonio Reyes, who currently plays for Atletico Madrid. Reyes has been a former teammate of both Beşiktaş's Simao Sabrosa, from when he played for Atletico Madrid as well as Guti from when they played together for Real Madrid. The 27-year-old forward played for Real Madrid on loan from Arsenal for the 2006-2007 season. Both Reyes and fellow teammate Guti went on to experience a championship title with Real, however when Beşiktaş's current technical Schuster came on to Real Madrid at the time, Reyes went on to play for Atletico Madrid.
A GOAL AGAINST GALATASARAY
Having played with such stellar teams as Seville, Arsenal, Real Madrid, Atletico Madrid and Benfica throughout his career, last season Reyes also scored the sole goal against Galatasaray in Spain with Atletico Madrid, for a game that ended at 1-0.