Fenerbahçe triumphs in the Arena 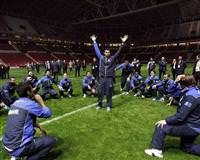 At first Fenerbahçe fell behind with a goal score by former fellow footballer Colin Kazim for Galatasaray. However, they managed to come back to score not one, but two goals. Captain Alex both scored and had an assist in Semih's goal in last night's game.
By winning the first derby played in the new Türk Telekom Arena, Fenerbahçe has written their name in history. However, when the club wrote another highly provocative statement, "For Fenerbahçe, neither time nor place matters," was quickly taken down.
GRAND CELEBRATIONS
With the final whistle blow, Fenerbahçe and their fans celebrated. At first, Fenerbahçe went straight into the changing room, however upon the calls from their fans they returned to the field to continue celebrations.
A very important outcome…
According to Fenerbahçe's successful defense player Yobo states, "For Galatasaray, it was just a normal match. However, we are headed towards the championship. We weren't very strong in the first half, yet we recovered in the second half of the game with our drive to win. That was the most influential factor that took us to through to the end."
GÖKHAN
"We come down well in the wings however we can't seem to bulk up in the penalty field. When I saw four to five people out there, I was pleased. I used to think that there weren't any other good stadiums besides Saracoğlu, however those who made this stadium must be praised. We felt the pressure."
VOLKAN
"There actually isn't much to say. The fact that out rivals stopped exerting the same pressure after they came up by 1-0 worked to our benefit. However, it is not easy to win here. This reveals Fenerbahçe's greatness. Our objectives are obvious."