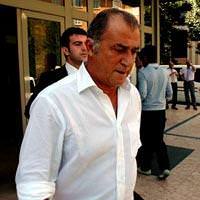 Having abandoned his position as Turkey's National Team Technical Director in 2009, Fatih Terim has received a number of very interesting offers. The latest of which is Oman, which has set its sights on participating in the 2014 World Cup to be held in Brazil. The offer was made by Oman authorities who came to Istanbul to speak with Terim two days ago. According to the information obtained, Terim has requested some time to make a decision.
Meanwhile, this weekend all league games have been postponed due to the impending National Team match against Austria on March 29th.