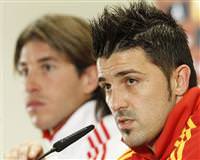 All eyes will be on 2010 World Cup finalists Spain and the Netherlands on Tuesday to provide the razzmatazz missing from international football which UEFA boss Michel Platini referred to last week.

The Frenchman spoke of his shock at hearing players saying they would rather win the Champions League than the World Cup but Tuesday's Euro 2012 fixtures have hardly created a stir of anticipation.

Spain and the Netherlands will bid to preserve their 100 percent qualifying records as the Spaniards travel to Lithuania (1845 GMT) and the Dutch host Hungary (1830).

In Spain's Group I, second-placed Czech Republic welcome Liechtenstein (1530) and in Group E Sweden should clinch three points against Moldova (1700) to close on second-placed Hungary.

In Group A, Turkey host Austria (1730) while Azerbaijan meet Belgium in Brussels (1845), all four teams a long way behind leaders Germany but with ambitions of finishing second.

Another four countries who trail Group C pacesetters Italy are in action, with Estonia playing Serbia in Tallinn (1830) and Slovenia travelling to Northern Ireland (1845).

Surprise Group F packages Georgia could leapfrog Greece and Croatia with a win in Israel (1605), while in Group D Romania will look to bounce back from losing to Bosnia by beating Luxembourg (1745).